Pro sports world thanks late NFL icon John Madden for his legacy, inspiration in football and beyond 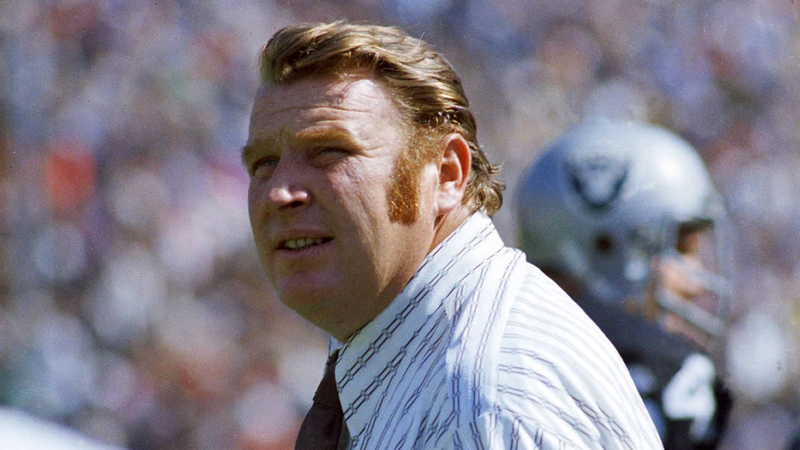 SAN FRANCISCO (KGO) -- NFL icon John Madden passed away Tuesday, a loss that is felt not just in professional football, but in sports across the board.

His death was announced by NFL Commissioner Roger Goodell, who says Madden "was football," and "we will forever be in his debt" for his contributions to the sport. He was 85 years old.

From one legend to another, Dallas Cowboys owner Jerry Jones said, "I am not aware of anyone who has made a more meaningful impact on the National Football League than John Madden, and I know of no one who loved the game more."

Cowboys’ owner Jerry Jones: “I am not aware of anyone who has made a more meaningful impact on the National Football League than John Madden, and I know of no one who loved the game more.” pic.twitter.com/woRffvTwox

The San Francisco 49ers posted a tribute to the Bay Area native, calling him an icon and inspiration who "will never be forgotten," and 49ers great Jerry Rice said he is "a coaching and broadcasting legend and "loved by all."

The 49ers mourn the passing of Bay Area native and football icon John Madden. He was an inspiration to so many and will never be forgotten. Our thoughts - along with those of the entire football community - are with John’s family and loved ones. https://t.co/SYhZXxQN8Y

A coaching and broadcasting legend and loved by all. You will be missed. RIP John Madden pic.twitter.com/Xj3IjVQ6Gl

The New Orleans Saints organization released a statement thanking Madden for what he did for their region:

Statement from the New Orleans Saints on the passing of the legendary John Madden 🙏 pic.twitter.com/XenkbaJA4q

Kansas City Chief's and Super Bowl-winning quarterback Patrick Mahomes called him a "legend" and offered condolences to the Madden family:

Rest In Peace to a Legend! Prayers to the Madden Family. 🙏🏽 https://t.co/4zvhu5vEUd

Pro Bowl cornerback Richard Sherman described the honor he felt, being on the cover of the iconic Madden video game:

R.I.P. to John Madden. It was one of my greatest honors to grace the cover of your video game. Thank you for the years of joy and motivation! pic.twitter.com/4P4NKdC1gT

The NFL posted a video, capturing some of Madden's moments in the booth, where he was "beloved by football fans everywhere."

Those who knew Madden say it wasn't just his career that was so impactful, but also the friendship he offered along the way.

"He was a friend before he was a coach," says former Raiders Senior Executive John Herrera. "He was always fun to be around."

The Raiders organization echoed these sentiments of Madden's friendship, hailing him as a "loyal and trusted friend. A Raider."

"A brilliant coach. A loyal and trusted friend. A Raider."

But news of his death is weighing heavily beyond the NFL, garnering responses from other pro sports leagues.

Warriors coach Steve Kerr went out of his way to address Madden's death during a press conference, describing him as an "incredible figure in American sports" and a "legend here in the Bay Area."

Warriors star Draymond Green said it was always about the "All Madden" team:

RIP to the legend Coach John Madden! I never heard of ALL-PRO teams during my childhood. It was all about the All Madden team!! One of a kind! Rest up Coach 🕊🕊🕊

The San Jose Sharks sent a message of their condolences:

We are saddened to learn of the passing of Bay Area sports icon, John Madden. Our thoughts are with the entire Madden family during this time. pic.twitter.com/XGEJD3TuYB

The San Francisco Giants say they are "saddened" to hear of his passing, and called him a "Bay Area Giant."

The Giants are saddened to learn of the passing of Bay Area sports and media icon, John Madden. We express our condolences to his family and all of those whose lives he touched. He was a Bay Area Giant.

Legendary MLB broadcaster Vin Scully shared loving memories, "He showed me the ropes during our brief football partnership. He was always kind and delightful," and said, "He can now join his former partner, Pat Summerall, in calling Super Bowls in heaven."

I was saddened to hear about the passing of John Madden, at age 85. One the all-time greats, he showed me the ropes during our brief football partnership. He was always kind and delightful. He can now join his former partner, Pat Summerall, in calling Super Bowls in heaven.

NBA and Los Angeles Lakers star LeBron James tweeted Madden was the "goat," continuing, "Your legacy will continue to live on."

Even California Governor Gavin Newsom wrote a touching tribute, calling Madden an "excellent man," saying "he redefined the role of a sports broadcaster" with his voice anyone could recognize:

Tonight we mourn John Madden — he redefined the role of a sports broadcaster — his voice as recognizable as anyone who ever did the job. He hoisted a Super Bowl trophy with CA’s own Oakland Raiders.

Our thoughts are with his family as we mourn this incredible man.