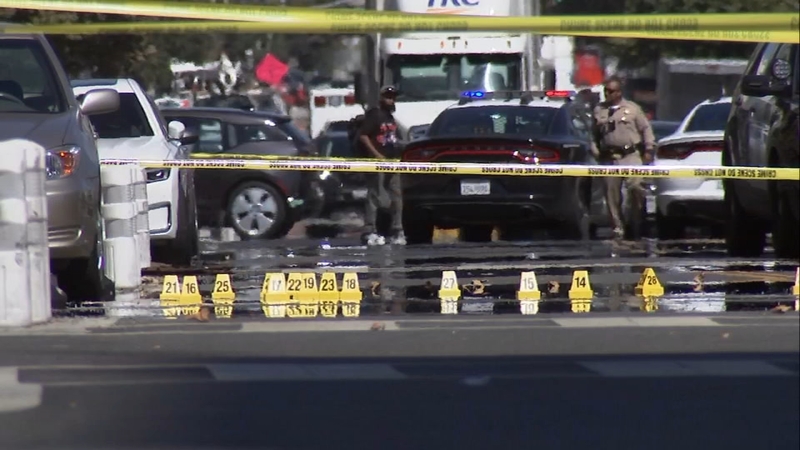 OAKLAND, Calif. (KGO) -- An Oakland police officer is in stable condition this afternoon with a gunshot wound to the leg, after an hours-long incident that began with a 911 call, led to a running gun battle and then a two-hour standoff at an apartment building just blocks from City Hall. It comes in a week when Oakland has already surpassed 100 homicides for the year.

An early morning 911 call about a man acting erratically with a weapon near downtown Oakland quickly turned violent when police say, the man shot one officer almost as soon as he and his partner arrived.

"This is a sober reminder of how dangerous it in the city of Oakland," said Oakland Police Chief LeRonne Armstrong. "This is a difficult day for us, but one we are very fortunate because the officer is currently being treated for non-life threatening injuries."

"We were within a hair's breadth of losing two police officers today," said Barry Donelan, President of the Oakland Police Officers Association. "They responded to a citizen's call and were essentially ambushed and then engaged in a gun battle."

After exchanging gunfire with police, the suspect ran to an apartment lobby, where an OPD team spent hours negotiating with him.

The 50-year-old suspect eventually did turn himself over to police.

An Oakland police officer is in stable condition after being shot Wednesday morning.

"Our ultimate choice is for him to make the choice to peacefully surrender," said Oakland Police Spokesperson Johnna Watson.

A five-block stretch of Telegraph Avenue and surrounding side streets remained closed for most of the day, while police investigated.

Residents say it was a terrifying start to the day.

"I woke up to a bunch of knocks, bunch of loud noise, bunch of cops drawing their guns saying 'get out of the hallway immediately,'" said resident Erroll Jenkins, Jr.

He said he didn't have time to grab anything and evacuated within seconds. He didn't know what was going on but he could tell it was serious.

"Obviously there is a threat. If there wasn't, there wouldn't be this many officers. There wouldn't be the guy out with a shield and 50 caliber gun waiting for the guy to come out. So this is something serious," Jenkins said as he looked around at the huge police response.

According to the Oakland Police Officers Association, this incident is just the latest example of how their officers are at risk on the streets of Oakland.

"What happened this morning and what happens every morning in Oakland is unacceptable," said Donelan. "At what point are the residents going to wake up and realize that having a running gun battle with police officers out on Telegraph Avenue is not how you want your city to be."