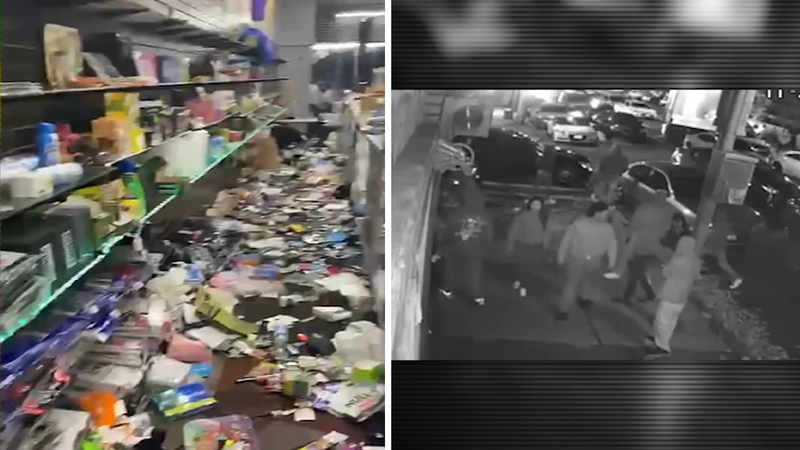 OAKLAND, Calif. (KGO) -- A small business in Oakland wants to get the word out about a mass robbery where they say one hundred thousand dollars in merchandise was stolen.

Ali Zerag says his brother's store, 98 Gift Shop in the area of International and 98th was broken into early last Saturday morning. Surveillance video shows dozens of people stream in and ransack the smoke shop.

$100,000 in merchandise was allegedly taken from this small business along International & 98th.

Ali Zerag told me his brother’s store, the 98 Gift Shop was targeted last Saturday night by dozens and dozens of thieves who broke in & ransacked the smoke shop. (1/3) #Oakland pic.twitter.com/nQS2GDR0Vw

Ali says his brother had owned the shop for 4 years and has never seen anything like this before.

He wants to public to know this is happening & that it’s not just big box stores that get hit. #Oakland pic.twitter.com/Ydr1nysXmL

This reminds me so much of the independently owned Wellspring pharmacy that was robbed in a similar fashion last weekend.

The owner of that shop says his security company didn’t even alert him when the break-in happened. #Oakland pic.twitter.com/psvieeN3o5

That weekend, the independently owned Wellspring Pharmacy in Oakland was also targeted in a similar fashion. Owner, Andrew Beyers said the robbery was devastating and employees spend much of their day off restoring the store so customers could have their prescriptions on time.

Oakland Police are investigating the incident.