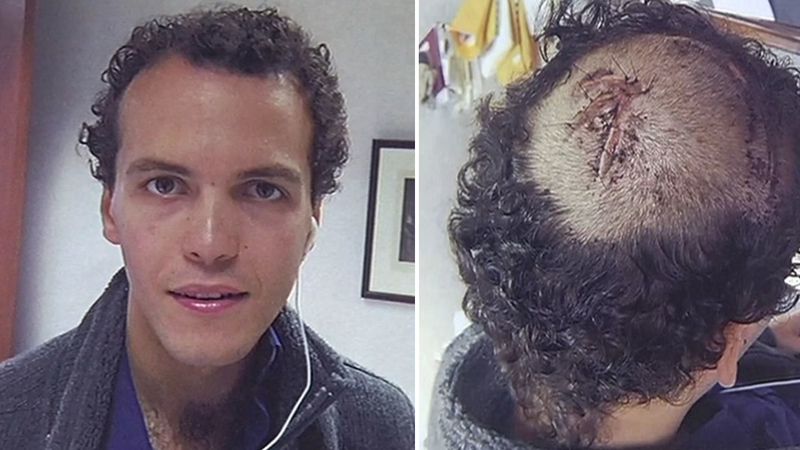 SAN FRANCISCO (KGO) -- For the first time, ABC7 News is hearing from the bicyclist hit by a San Francisco double decker tour bus.

The City Sightseeing bus went on a wild ride in November, hitting a cyclist, parked cars and scaffolding in Union Square. The bus driver has said his brakes failed, but the San Francisco Police Department is still investigating.

ABC7 News spoke exclusively with the cyclist who was visiting San Francisco from Brazil. The 26-year-old is doing a lot better.

"After that I almost died, I'm still grateful. I was grateful and I'm more grateful nowadays," said Guylherme Kfouri.

Kfouri said this after needing stitches to his head. Surveillance video shows the City Sightseeing tour bus hitting him.

"I was looking at the sky, five seconds later I was in the hospital," he said.

Kfouri says he didn't wake up until the next night.

"What happened? 'She said the bus crashed into you and after crashed a lot of people and cars,'" he said.

"They have to be safety-checked and not only that but who is driving the buses," said attorney Marc Libarle.

SFPD is investigating the Union Square Crash. CHP plans to release inspection results of approximately six other City Sightseeing tour buses as early as this week. A source close to the inspection says the buses could have mechanical violations.

Kfouri says he was visiting San Francisco from Brazil.