Oscars 2020: Here's a behind the scenes tour of red carpet preparations 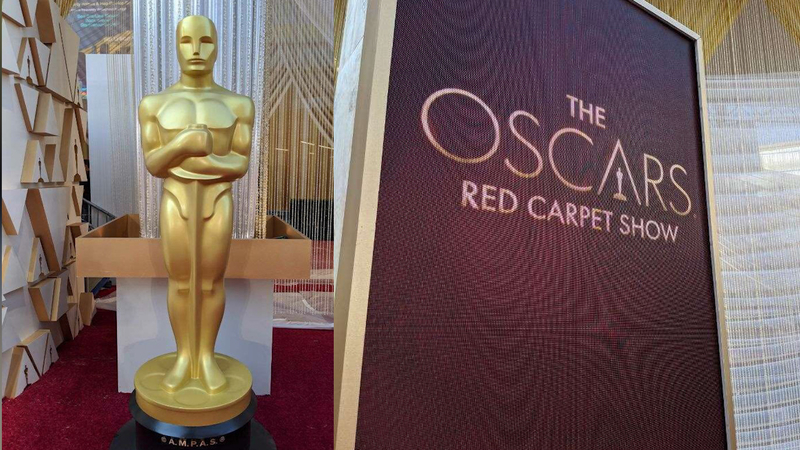 Here's a behind the scenes tour of red carpet preparations

LOS ANGELES (KGO) -- There's a lot happening on the red carpet ahead of the 92nd Oscars on Sunday.

This is ABC7 news anchor Dion Lim's third year covering the Academy Awards and she takes us behind the scenes with what's new and happening.

Unlike previous years where there are risers big enough to hold hundred of guests to watch the celebrities grace the red carpet, this year there are two smaller spectator sections along the carpet.

Preview of my Saturday red carpet look! I feel like The Little Mermaid 🥰 — thanks @TheWigFairy! #Oscars #Oscars2020 @abc7newsbayarea pic.twitter.com/r4bVqQPOLj

Dion spotted media from all around the world. It's not uncommon to see journalists interviewing other journalists like a man from Arabic TV asking a man from Australian TV questions about covering Hollywood's biggest night.

A man known as the unofficial Ambassador to Hollywood, Gregg Donovan holds a replica statuette and greets Oscars fans outside the red carpet. He says he knows more than 100 languages and greets tourists in their native tongue! Dion got to hear him send greetings in Swedish and Finnish and he even had a conversation with a gaggle of girls in Japanese!

This is @GELMANLIVE’s 9th year of Live’s After Oscars Show & he says it never gets old! #oscars https://t.co/E8wu8OSqGu pic.twitter.com/6paPweiQS6

Dion met a young woman from San Francisco named Atessa Moghimi who is part of the Academy Gold Program. Through her internship she landed a coveted spot as a trophy presenter for Sunday's awards show!