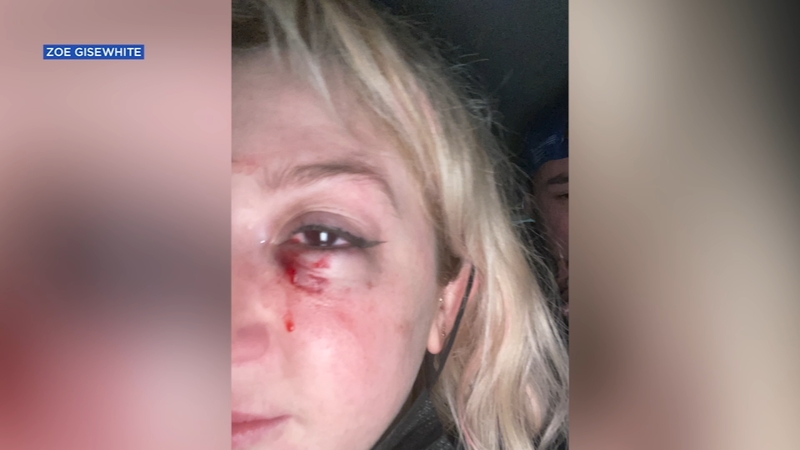 SAN FRANCISCO (KGO) -- In a moment, Zoe Gisewhite's life took a turn for the worst.

Gisewhite was sitting a bus stop in San Francisco waiting for a ride early Saturday morning when she felt something hit her face.

"I felt my hand sting and I was peeling something off my face. And then my boyfriend looked at my face and said, "Oh, my god,'" said Gisewhite.

Gisewhite and her boyfriend were waiting for a ride on the corner of Sunset Boulevard and Noriega Street after working at Outside Lands when a car drove by and someone shot a paintball at them.

The paintball left puncture wounds in her lower eyelid and left her bleeding. But within seconds, she realized that wasn't the worst of it.

"The second I came to, I said 'I am blind. I cannot see because everything was very dark at that point," said Gisewhite.

A man faces felony charges and hate crime allegations in connection to 7 incidents against Asian women in San Francisco between March and September.

A week later, she can only see some colors on the corner of her left eye. She said the rest looks like she is looking through thick jello.

She has seen a doctor several times and has been told she may have suffered damage to the lens of her eye. She also has blood pooling inside the eye. They still don't know if the blindness in the left eye is permanent.

San Francisco police could not say how serious a problem paintball attacks are in the city.

In November of last year, at least four people were hit by paintball attacks in Bernal Heights. The victims suffered bleeding and welting in the impact areas.

The attacks happened a month after Marin County Sheriff's deputies arrested a 19-year-old man on suspicion of firing 30 paintball rounds at a pregnant woman.

Investigators reported about 20 paintball similar incidents leading up to the arrest.

Gisewhite is not sure why someone shot at her. She thinks it may have been people getting carried away during Halloween.

But she wants them to know the injury they caused is no joke.

"Maybe being Halloween weekend, its like, it's just kids, whatever. But I am potentially losing my eye and I don't have vision and it's very frustrating," said Gisewhite.

The injury has left her unable to work as a colorist at a hair salon in the financial district. She hopes to get back to work soon, even if she can only see out of one eye.

Doctors warned her she may also face possible cataract surgery in the future.