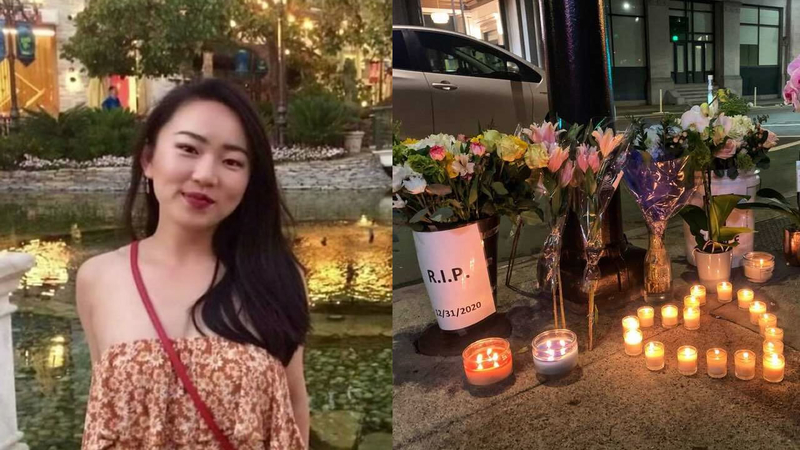 SAN FRANCISCO (KGO) -- Less than a week after a tragic and heartbreaking accident in San Francisco, a grieving mother is talking to us from Japan.

Her daughter was one of two people who was killed after being hit by a vehicle as she walked in a San Francisco crosswalk. Officials say the suspect in the case was a parolee in a stolen car.

Two women died in San Francisco on New Year's Eve after being struck by a vehicle in a hit-and-run in the city's South of Market neighborhood.

Hiroko Abe could be seen wiping tears away Sunday evening from her home in Japan as she talked about the memory of her daughter Hanako, who was killed as she walked in a crosswalk in the SOMA district of San Francisco on New Year's Eve.

As the memorial for Hana grows in San Francisco, 45-year-old Troy McAlister is behind bars in connection with both Hana and another woman's death. Police believe McAlister, who is on parole for robbery, was trying to make a getaway after committing a burglary.

They believe he then crashed into another car and that his car hit and killed Hana and another woman. Police found an illegal gun in his car along with drugs. They have also charged him with DUI.

There are questions out there as to why McAlister wasn't behind bars due to his past crimes but family and friends are focused on Hana's memory.

Kikuchi translated what Hana's mother Hiroko was saying, "The main thing she wants to tell everyone about Hanako, Hana is that even when she came across problems she would still always smile."

Her close friend Jason Mayes went on to say, "It's very hard to come to terms that something like this could happen to such a wonderful person. Even during lockdown as people were moving out of the city, she would find little treasures as she liked to call them that people would throw away and she'd turn them into something special. She has always made time for her friends and she did not deserve this and no one deserves to have died like this."

San Francisco's District Attorney Chesa Boudin says SFPD didn't notify parole in McAlister's most recent arrest and Daly City police didn't arrest McAlister after receiving a report that he may have stolen the car. They also didn't contact parole according to the DA.

The state says they followed procedures and that no criminal charges were filed by the district attorney.

Hana's mother gave her thoughts on the suspect. Kikuchi translated for her saying, "Even if she hates him, this won't bring her back. Also, Hana always wished for everyone to be happy and if it was her, she would like this person who did this to become happy as well and live a happy life."