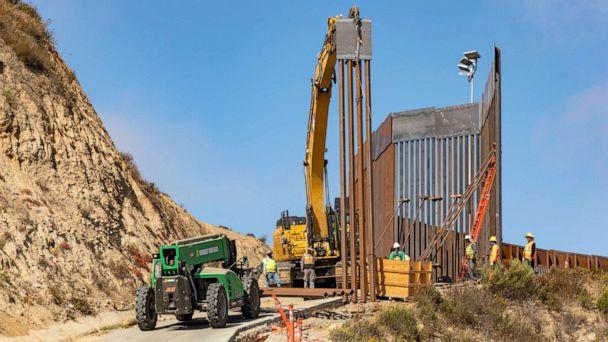 Defense Secretary Mark Esper said on Tuesday that the Pentagon is prepared to provide additional financial support for the president's border wall.

The Washington Post, citing internal planning figures, reported that President Donald Trump was preparing to divert an additional $7.2 billion from the Pentagon's military construction and counter-narcotics funds to border wall construction. The figure would be five times what Congress authorized for that purpose in the 2020 budget.

"The first priority of the DOD is protection of the homeland," Esper said during a Pentagon press conference with his Japanese counterpart on Tuesday. "So the southwest border is a security issue. And so we'll see how things play out, but we remain committed to supporting the Department of Homeland Security and it's mission."

Asked if that support was financial as well, Esper replied, "If that's what it takes, we are prepared to support."

According to the Post, the Trump administration wants to use $3.7 billion from the military construction fund and $3.5 billion from the counter-narcotics fund to allow the government to complete about 885 miles of new fencing by spring 2020. More than $6 billion was already diverted from those accounts for the border wall in 2019.

When asked for a comment on the Post's reporting, a Pentagon spokesperson said, "The Department of Defense has no new announcements with regard to border wall construction."

It was only last week that a federal appeals court ruled the administration could use $3.6 billion from the military construction funds for the border wall. The Jan. 8 ruling overturned a federal district judge's order that blocked the money -- a temporary win for the president pending further appeals.

Last Friday, the Trump administration announced it had completed 100 miles of barrier along the southern border. The president has repeatedly pledged to construct 450 miles of barrier by the end of 2020 but most of the 100 miles completed thus far have been replacements of the smaller barrier designs that were constructed with decades-old technology.