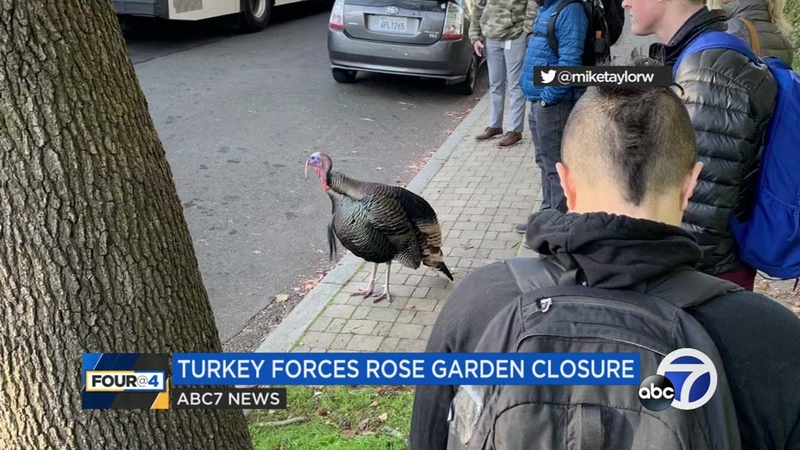 OAKLAND, Calif. (KGO) -- An aggressive turkey with a bad habit of attacking people has forced the closure of Morcom Rose Garden in Oakland's Grand Lake neighborhood.

The turkey, nicknamed Gerald, isn't exactly new to town. Mike Taylor, who lives nearby, says Gerald used to line up like clockwork alongside casual carpool riders, before COVID-19 put an end to that sort of socializing. 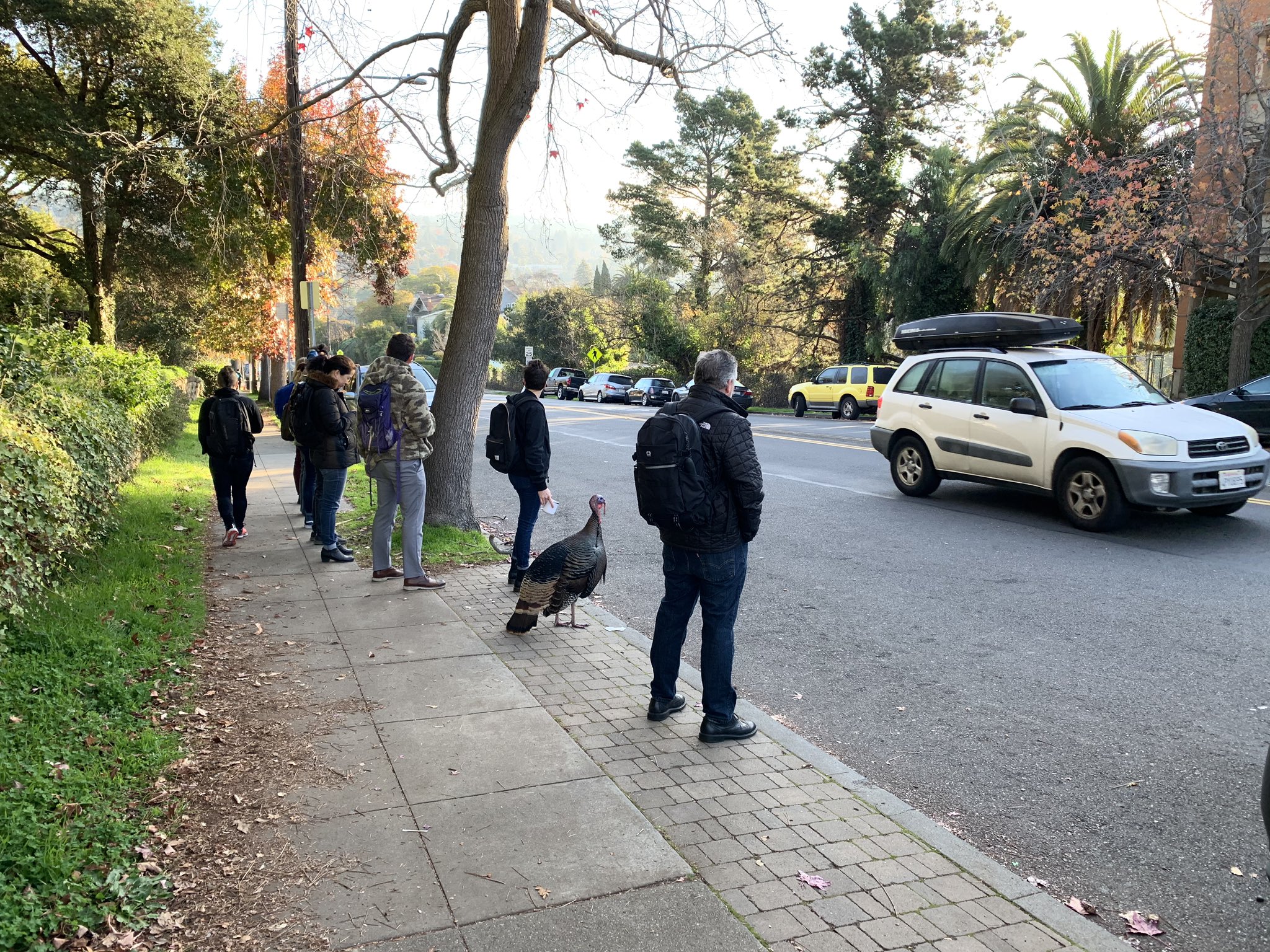 Gerald the turkey waits for casual carpool near Oakland's Morcom Rose Garden in January 2020. The turkey started displaying aggression toward people in May 2020.

However, Gerald's aggression is a newer phenomenon. Perhaps feeling the stress of a global pandemic or America's long legacy of racism, Gerald has taken to viciously attacking visitors to the rose garden.

Oakland Animal Services didn't know exactly how many times Gerald has unleashed his fury on fellow park visitors, but the agency did pass along more than a dozen email complaints they've received about the turkey.

"His favorite target seems to be older women, although young children are also at great risk," reads one email.

"I swear I was getting flashbacks to the velociraptor scenes in 'Jurassic Park' as he was 'cooing' at me sizing me up," reads another. "And before you laugh at all this, I'm telling you he was relentless!"

Others describe the turkey charging at them, jumping on them, clawing and pecking incessantly as they try to run away.

The city's parks department had to close the garden out of a concern for public safety.

Wildlife at the park, including Gerald, is regulated by the state's Department of Fish and Wildlife, according to a notice posted by the city's parks department at the end of May. The city asked Fish and Wildlife to relocate the turkey, but they declined and encouraged people to "train the turkey to keep a distance from humans."

Apparently that didn't work.
Another notice posted on June 4 states the Department of Fish and Wildlife has approved a depredation permit. However, "the city is not currently proceeding with depredation and considers the removal, and humane euthanasia, a last resort." 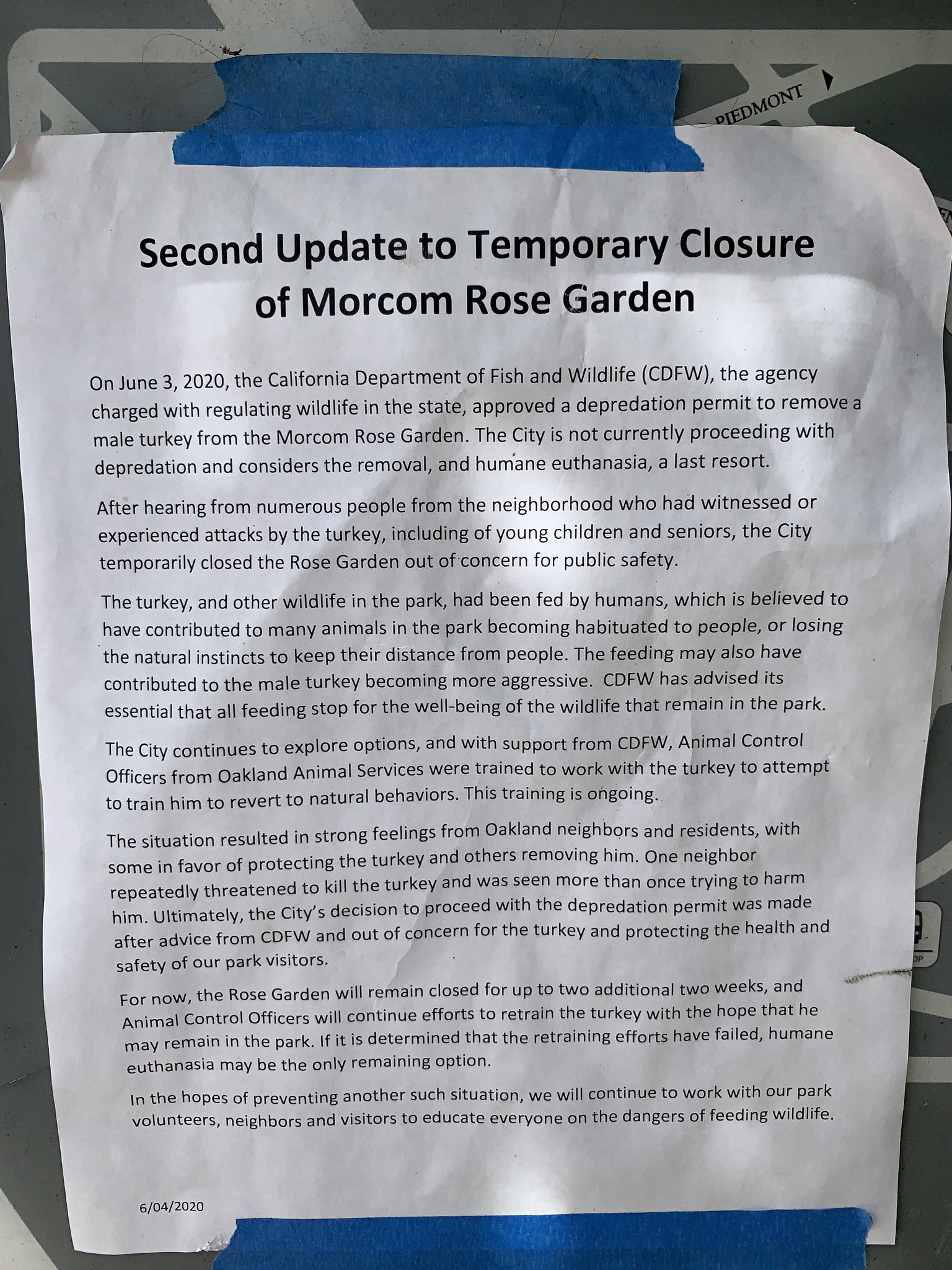 A notice, posted at Oakland's Morcom Rose Garden, informs visitors of a closure due to an aggressive turkey.

For now, the city is keeping the park closed and begging people to stop feeding Gerald (or any other wildlife they may encounter).

"The turkey, and other wildlife in the park, had been fed by humans, which is believed to have contributed to many animals in the park becoming habituated to people, or losing the natural instincts to keep their distance from people. The feeding may also have contributed to the male turkey becoming more aggressive," reads the notice from the parks department.

Animal control officers have also been tasked with working with Gerald to "train him to revert to natural behaviors," but even that has been a tough undertaking.

"From what I am hearing from neighbors, the number and intensity of the attacks has decreased, but he is still approaching and chasing people," said Animal Services spokesperson Ann Dunn. "From the advice I received from wildlife experts, we would know the retraining has worked if he retreats and keeps his distance from people. Unfortunately, he is not doing that on a consistent basis, even with very few people in the park."
Report a correction or typo
Related topics:
pets & animalsoaklandoaklandturkey
Copyright © 2021 KGO-TV. All Rights Reserved.
TOP STORIES
Afghan refugee family safely lands in Bay Area
North Bay conducts wildfire evacuation drill
Gabby Petito honored at memorial service on her native Long Island
Central Freeway on-ramp in SF reopens, Caltrans says
3 people dead after Amtrak train derails in Montana
Signal jammer suspected as burglars fool Nest security camera
Man punched in the face in brazen attack at SF bus stop
Show More
Warriors Basketball Academy offering interactive workouts in Oakland
Air quality advisory extended through Monday due to wildfire smoke
Who's eligible for Pfizer booster shots?
$30K in rewards offered for Brian Laundrie's whereabouts
Beloved SJ film developer's business in jeopardy after flood
More TOP STORIES News