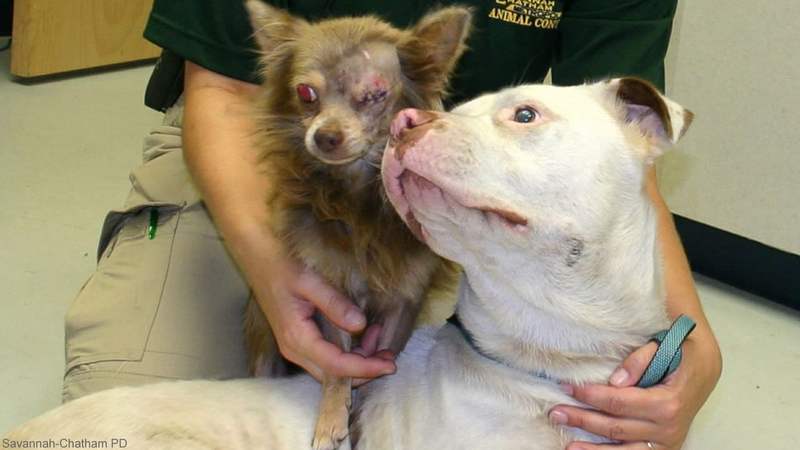 SAVANNAH (KGO) -- A pit bull named Jonie is being hailed as a hero for saving Chachi, an injured Chihuahua.

Jonie was found carrying her friend in her mouth in a Savannah, Georgia, neighborhood last week.

The long-haired Chihuahua mix had suffered an eye injury. And the only time Jonie, a white Lab-pit bull mix, would put him down was to lick his wound.

Animal control officers rescued the duo off the street and took them to the Savannah Chatham Metropolitan Animal Control Shelter, where Chachi underwent eye surgery.

Vets were not able to save his severely infected eye, but they managed to stitch it up. Chachi's been recovering at the shelter clinic ever since.

Jonie was finally allowed to reunite with Chachi a few days after they were rescued. The emotional reunion of the two was completed with "licking, whining, caressing and cuddling," according to the Savannah-Chatham Metro Police Department official.

"It's not every day we get to see such devotion between two special dogs like this," Christina Sutherin, the Savannah-Chatham animal control officer, told ABC News.

Animal control officers say there's a rare bond between the two. That's why the dogs were up for adoption, as a pair.

And some good news for the duo -- the Savannah-Chatham Metropolitan Police Department announced on its Facebook page that the pair may have found their forever home.

And yes, in case you're wondering, officials at the animal shelter gave the two their names based upon characters from the popular television show "Happy Days."