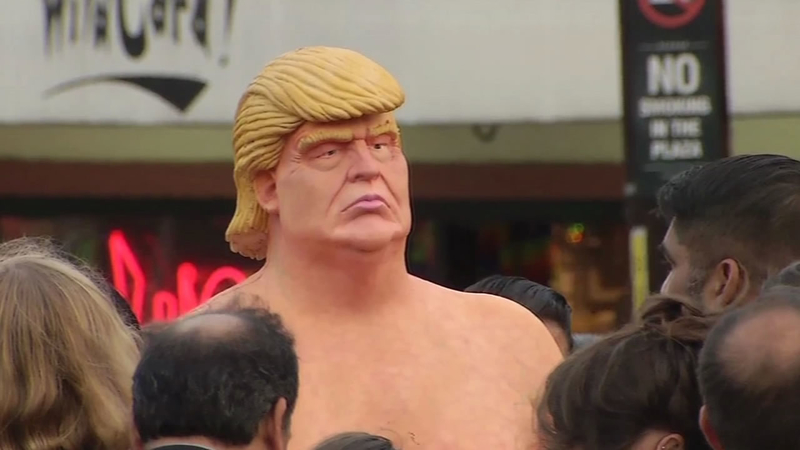 The nude statue was the hottest destination for selfies in San Francisco after an artist set up the display in the Castro District Thursday.

But the artwork is hours away from being removed. Public works said it plans to take it down.

Supervisor Scott Weiner said he wants to save the statue and the owner of Lefty O'Doul's has agreed to give it a home.

"Donald Trump is in the Castro showing off his short comings," said Daniel Vojir.

One man brought a magnifying glass. Pets were also popular, as long as Donald Trump was the butt of the joke.

"A little healthy ridicule after all we've had to listen to from the Donald," said John, a San Francisco resident.

"Now we can see him here, completely exposed for what he really is," said tourist Joe Brando.

The statue turned up at Castro and Market. One of five commissioned by activist group Indecline. The others are in Los Angeles, Cleveland and Seattle. New York too, but the Big Apple already took it down.

Leo Lacayo is the chairman of the San Francisco Hispanic Republican Association. He says the statue isn't necessarily a negative for Trump.

"The statue's for fun," Lacayo said. "It's not that they talk badly, or ill of him, or well, but that they talk of him and that promotes the agenda that he's holding up for jobs and security."

"It's interesting. I don't think there's anyone good to vote for this time. Put one up of Hillary, we'll take a picture of her too," said San Rafael resident Colleen Kelly.

The director of public works says trump needs to go and not for political reasons. "It does not belong here and there hasn't been a process of installing this statue," said department of public works director Mohammed Nuru.

He says nothing is allowed to be affixed to a sidewalk without permission and the crowd is creating safety concerns.