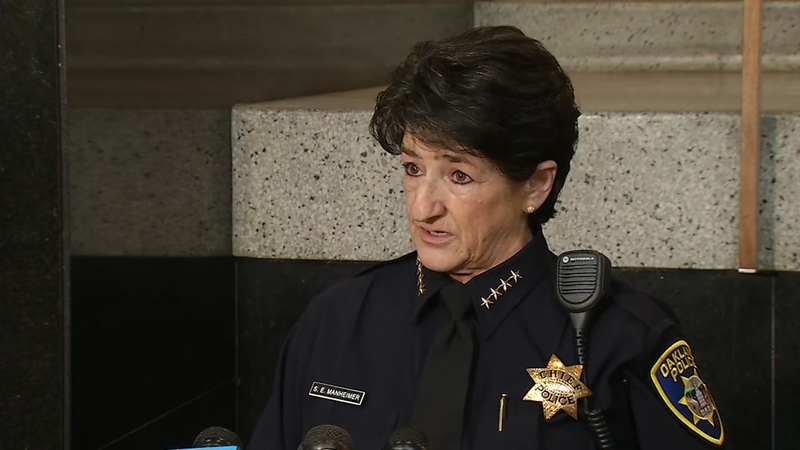 OAKLAND, Calif. (KGO) -- After several days of Bay Area protests over the death of George Floyd, the Oakland Police Department held a press conference Wednesday evening to explain the city's curfew and crowd control tactics that have stirred controversy in the community.

She understands people are "hurt, dismayed, and want to express themselves."

When it comes to peaceful demonstrators she says, "We stand with them, we understand them, we find the need and importance in it, we validate it and we facilitate it."

Chief Manheimer went on to say that what happened in Minneapolis "tarnishes all badges," and the department is "doubling down" to regain the community's trust.

Then she spoke to the times when what starts as a peaceful protest, turns to violence, looting and extreme vandalism. Times when she says police need to use extreme tactics, like curfews and tear gas.

She explains the criteria for when and why they are used.

The curfew, she says, it not meant to target people who are going about their normal day, running errands in their community, or coming or going from work.

"It is specifically a tool for those violent disruptors who would seek to destroy part of Oakland and cause fear in our community," she said.

She talked about how many businesses, of all sizes, are already hurting during the coronavirus pandemic, and cannot afford to be hit by vandals and looters.

The police department uses the curfew judicially, and only needed to enforce it on one night of protests so far.

"We make sure that we use it only in those instances where we need to protect and defend our community."

Then she talked about the criteria "crowd control measures" in the OPD policy, like smoke and use of gas.

"It is never our intent to want to use them," she said, adding that she understands the community's concerns. "However, there are guidelines, strict guidelines, of when we will use that."

According to Chief Manheimer, those guidelines state that police may use gas, or other "distractors" like smoke when there is:

She says these measures are used at a high level of discretion.

"We don't want to arrest people," she said, which is why they use these tactics as a warning to clear crowds before they have to.