A couple in Southern California was captured on video apparently harassing street vendors who were selling fruit.
KABC 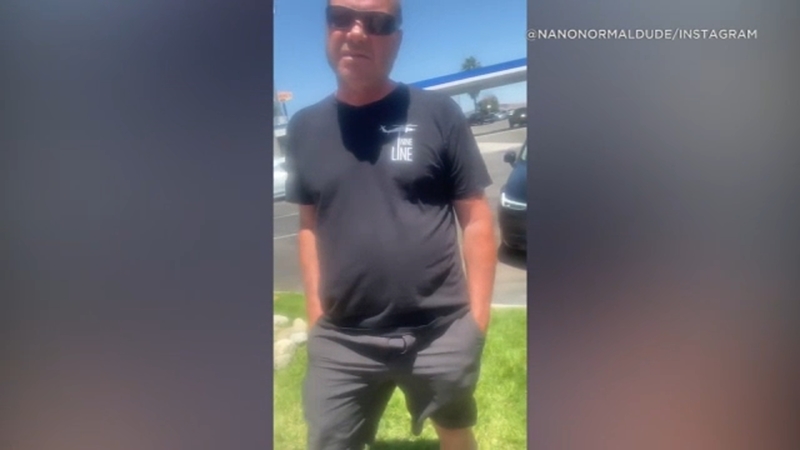 The men who took video of the incident say they stopped to help the fruit vendor after the couple started yelling at the vendor to leave.

Video shows the man who was upset over the fruit stand, calling the business an "illegal setup" because he said the street vendor did not have a permit.

The man was sitting down near the fruit stand as he was questioned by the men who were recording the encounter, which spanned several minutes. Meanwhile, the woman he was with waited inside a car for a majority of the footage posted to social media.

That car is registered to the owner of Bergie's Bar and Grill, which is a few feet away from the incident.

"I just wanted to de-escalate the situation," said Ubaldo Alcantar, who recorded video. "We've seen a lot of crazy things going on recently and we just didn't want another incident."

The confrontation between the man and those who were recording became heated at one point.

"Get it the (expletive) out here. This isn't Pacoima. It looks like (expletive)," the man says about the fruit stand to the people recording in one of the videos posted.

"We aren't the (expletive) ghetto. It needs to go," the man later says.

"Where's your health permit? Where's your resale permit? Prove you pay taxes?" the man says when asked about the fruit stand.

L.A. County has issued strict guidelines for street vendors during the COVID-19 emergency, including having a valid health permit and have access to hand washing facilities and hand sanitizer.

The incident happened just off the 14 Freeway near Sand Canyon Road.

L.A. County sheriff's deputies did respond. It is unclear whether anyone was arrested or cited.

The videos posted do not show the beginning of the incident.

The street vendor on Monday returned to the same spot to applause and cheer as dozens gathered to support him.

The vendor said he drives a forklift, but hasn't had work since the coronavirus pandemic started and he recently began selling fruit.