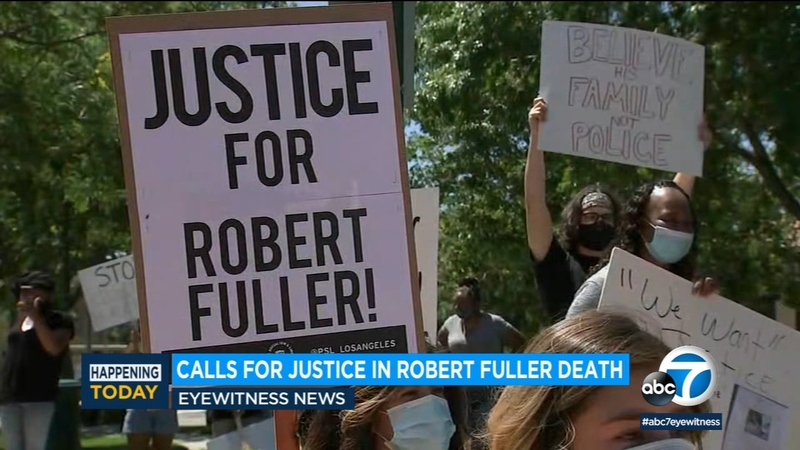 ROSAMOND, Calif. -- Los Angeles County Sheriff's Department deputies were involved Wednesday in a fatal shooting with the half-brother of Robert Fuller, the man who was found dead hanging in a Palmdale park last week, sources tell our sister station ABC7 in Los Angeles.

An attorney for the Fuller family confirmed that Terron Jammal Boone, the half-brother of Robert Fuller, was killed during the incident in Rosamond.

Detectives say they were looking for a suspect believed to be involved in kidnapping, spousal assault and assault with a deadly weapon.

They spotted a man in a Jeep they believed to be the suspect in Rosamond and followed him for some time, then attempted a traffic stop. They say a woman and a 7-year-old child were also inside the vehicle.

They say the suspect opened the door and began firing at deputies and they then returned fire.

Investigators say the woman who was in the driver's seat is not the victim in the assault case. She was shot in the chest and is expected to survive her injuries. The 7-year-old girl was uninjured.

A Jeep with multiple bullet holes in the windows was present at the scene. Officials say a gun was recovered.

The incident happened around 4:39 p.m. Wednesday in the 3400 block of 15th Street West in Rosamond. Los Angeles County Sheriff's Department homicide detectives are responding to assist in the investigation.

"This afternoon I had to notify the sisters of Robert Fuller that their half-brother Terron Jammal Boone was killed by Los Angeles County sheriff's deputies in Kern County."

"At this time, until we receive all of the information, the family and their legal team doesn't have any further comment on this incident. The family respectfully asks that their privacy be respected."

Doorbell video posted to Twitter captured some of the audio of the encounter, including the sound of multiple shots being fired:

There was no initial indication that the incident had any direct connection to the investigation into Fuller's death.

Fuller, 24, was found hanging from a tree in a Palmdale park on June 10.

Although authorities said initial indications are that Fuller died by suicide, his family and others have demanded further investigation.