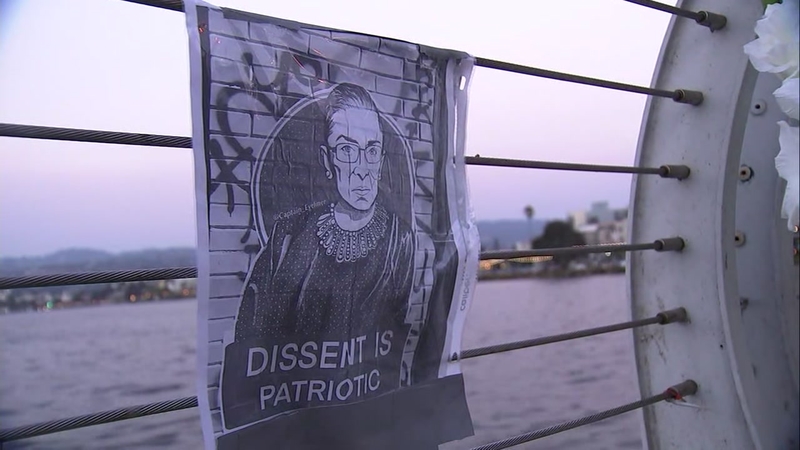 SAN FRANCISCO (KGO) -- Ruth Bader Ginsburg passed away on Friday and since that time there has been an outpouring of love for her all over the country. Vigils were held over the weekend in cities across the Bay Area.

"Today is really like a moment in history. Congregations all over the world are honoring her in this moment," said Rabbi Chaya Gusfield of Oakland.

Candles were lit Sunday night in Oakland to remember Supreme Court Justice Ruth Bader Ginsburg, who passed away at the age of 87.

The passing of Justice Ginsburg has sparked strong emotions in the Bay Area, from both liberals and conservatives who knew and respected her. A UC Berkeley law professor shares her memories of clerking for the Supreme Court icon.

"Such an incredible woman that so many young women can look up to," said Josie Hewitt.

Hewitt is a teenager who came to the Ginsburg vigil in Oakland on Sunday night with her mom. All to remember a woman who was considered a trailblazer when it came to women's rights.

"It's really exciting to be here with my mom just because she's taught me so much about standing up for myself as a woman," Hewitt added.

Sunday vigils for Ginsburg were held across the Bay. Along Lake Merritt in Oakland, on the steps of the courthouse in Martinez, and in San Francisco where Mayor London Breed spoke saying, "this woman in the 1950's in college faced insurmountable discrimination because women were not welcome in the halls of universities at that time."

RELATED: 'RBG' was a frequent visitor and favorite in the Bay Area in recent years

"I'm just hoping that he's going to replace her with a woman. Hoping that she's as liberal and fair as Ruth Ginsburg was," says Jane Sheard who attended Sunday night's vigil in Oakland.

And while Ginsburg was in her upper 80's, her rulings were far reaching and appreciated by younger generations.

"I'm 15, she definitely did. A bunch of my friends were super, like, it hit them really hard. It hit me really hard. She was such a feminist icon."

Meanwhile in Santa Rosa on Saturday, people gathered at Old Courthouse Square to honor Justice Ginsburg with a candlelight vigil.

On the eve of Rosh Hashanah, hundreds held a vigil to mourn and honor the life of feminist icon, and the first Jewish Justice, Ruth Bader Ginsburg.

Many of them also reflected on the Justice's impact on American life through her decisions on the bench.