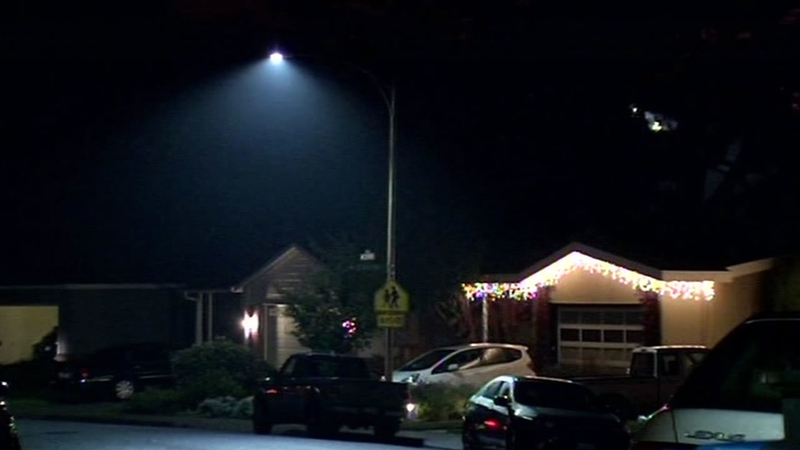 SAN BRUNO, Calif. (KGO) -- Neighbors in one Bay Area city are taking charge to get their broken streetlights turned back on. The solution involves a power outlet and a heavy duty extension cord.

The city of San Bruno is looking for volunteers who may be willing to plug in the streetlights and get paid for doing so.

If you are out for an evening walk in San Bruno's Crestmoor Neighborhood, you better have a flashlight.

"If you weren't from this neighborhood, you might get a little freaked out," homeowner Benny Chau said.

It's dark. More than 50 streetlights have been off since mid-October when they blew a fuse. Repairs have been tough because underground wiring is so old.

Resident Sue Thourson said, "I leave the house at 10 to 5 in the morning and you see nothing."

Things are now brighter for Thourson since the streetlight in front of her house is on. It turns out she is supplying the power from her own house. The city supplied the extension cord and $50 a month to pay for the electricity.

"I thought it was a great idea. It's not hurting anybody, so we did it and now there's light for everybody in the neighborhood or at least on our block," Thourson said.

Other homeowners are volunteering to plug in too, but there is a contract to sign that if something goes wrong it's not the city's fault.

Some neighbors say they're already doing their part leaving porch lights on all night.

Temporary lights set up near intersections are powered by generators, but homeowner Jack Figone says they're too loud. He said, "We're overwhelmed with light here. It ruined all my decorations."

Holiday lights have helped, but soon they'll be gone. The city says a permanent fix for the streetlights could take several months or up to a year.