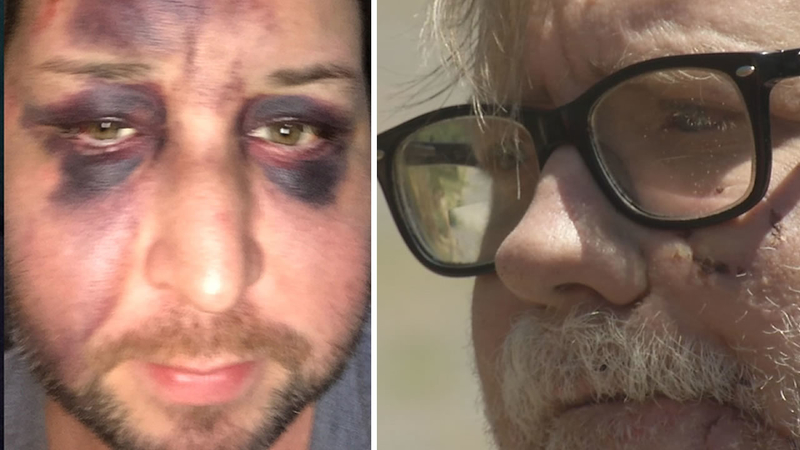 SAN FRANCISCO (KGO) -- The beatings of two Bay Area men have police in Oakland and San Francisco baffled. One of the victims is a drag queen, the other is Scott Long, a human rights activist on LGBTQ issues.

He was struck from behind with what he thinks was a tire iron on June 9, near the corner of 35th Avenue and Kansas Street in Oakland.

"I suddenly felt this huge blow right upside my head over my ear," explained Long who had to have surgery to reconstruct his jaw and cheekbone.

Long says he caught a glimpse of the man, a very thin white male, shorter than he.

Oakland police came to his house to follow up on the investigation. The motive is unknown. Long has no idea why he was attacked.

"San Francisco, 2018 there is so much diversity and so much acceptance and this is still happening," said Tim Tait of San Francisco.

He says he was targeted because he's a drag queen. He was leaving the Eagle Bar at South of Market at around 10 o'clock, also on June 9. He made a left on Bernice Street to go home.


"Got about one-quarter of the way down the block when I felt a bang to the head and started to get attacked," Tait who also goes by the name "Ginger Snap," was punched, kicked and dragged.

"We did locate surveillance camera video so we are reviewing those now and looking at the footage to see if it captures anything that will help us," said officer Joseph Tomlinson with the San Francisco Police Department.

With Pride Weekend around the corner, police are recommending that people travel in groups.

"If you have the ability to move with a group, absolutely do so," said Robert Rueca, also with SFPD.