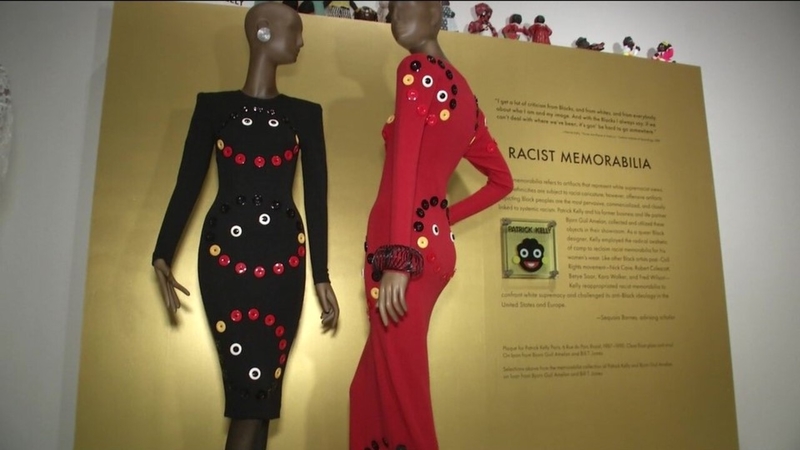 SAN FRANCISCO (KGO) -- A new exhibit at San Francisco's de Young museum is a joyous look at one of the world's most important African American fashion designers. Patrick Kelly has almost as many intriguing layers as his designs.

Strolling through the "Patrick Kelly: Runway of Love" exhibition at the de Young museum might be the closest feeling to walking down a fashion runway yourself, with videos from vintage shows providing the beat, and exotic, colorful gowns flowing all around you. It's a feeling of inclusion, that friends say, came straight from Kelly's heart.

And by the 1980's Kelly had become a sensation in American and European fashion circles. He was first American and first Black designer inducted into France's prestigious fashion federation, Chambre Syndicale du Prt--Porter des Couturiers et des Créateurs de Mode. But while his rise was meteoric, presenting curator Laura Camerlengo says, it was anything but smooth.

"Patrick overcame tremendous obstacles to become the toast of Paris before the age of 35 -- being born and raised in Vicksburg, Mississippi, in the 1950s, and 60s in a segregated environment, in an environment where he experienced brutal acts of racism," explains Camerlengo.

And those early experiences are literally woven into his work. Work that was sparked in part by a gift his former partner Bjorn Amelan picked up in a Paris flee market. It was a porcelain ashtray, formed in the image of a Black person's face.

A premiere exhibition at San Francisco's de Young Museum was an early victim of the novel coronavirus crisis, closing down for the shelter-in-place order just as it was set to open.

"I gave it to him. And Patrick had the generosity of spirit and the vision instead of reading me the Riot Act, or even explaining to me what these pieces meant, which he never did, and which I only really came to realize over time. He said to me, 'we will start collecting these,'" Amelan remembers.

Kelly not only collected the racially charged items, he began turning them into a statement, working them into clothing and jewelry.

"His attitude was to say that by tucking such artifacts away and refusing to see them, we maintain their power over us, their negativity," Amelan believes.

"For Patrick, there was a power in collecting this material, resting with the imagery and sort of throwing it back to the public in his fashion designs," she says.

At his height, Kelly's fashions spoke to the gay community and communities of color, the traditional fashion world and wider public all at once. But like his some of his swirling fabrics, Patrick Kelly's own times would soon envelop him.

"When we received the diagnosis that both of both of us in the summer of 87, that we were HIV positive," Amelan recounts.

He says the couple initially kept their diagnosis a secret because of business considerations. It wasn't until sometime after his death in 1990, that the public began to absorb the struggle. Amelan survived with treatment and has had decades to watch Kelly's stature continue to build, in exhibits like the de Young's Runway of Love.

"I hope people walk away from the exhibition feeling inspired feeling joy, and feeling like they know Patrick Kelly on a really intimate level."