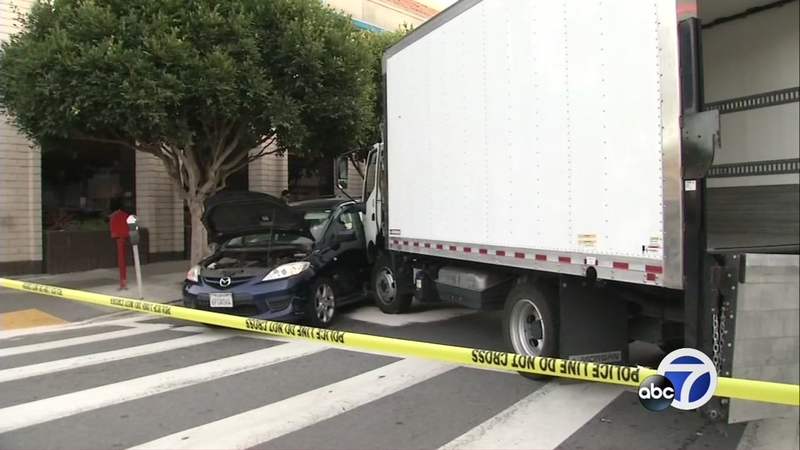 A truck driver making deliveries lost control on busy Geary Boulevard and hit two pedestrians and a car with a family inside.

SAN FRANCISCO (KGO) -- A truck driver making deliveries lost control on busy Geary Boulevard and hit two pedestrians and a car with a family inside.

The accident shut down eastbound Geary near 21st Avenue in San Francisco's Richmond District for several hours this evening.

Collision at 21st and Geary sent two elderly pedestrians to the hospital. One in critical with internal bleeding, the other in serious condition with a punctured long and broken rib. #SanFrancisco pic.twitter.com/sdcVNOyrKF

"Oh my God, my adrenaline was totally rushing. It was crazy," said Heather King. King and her family had the scare of their lives when a delivery truck slammed into their car.

"The door, yeah it got smooshed in," said King's son Alden.

Fortunately, all five family members were okay, but two elderly pedestrians on the sidewalk were injured.

The driver of the delivery truck plowed into them when police say he lost control crossing Geary Boulevard.

Eastbound Geary Boulevard will be shut down at 21st Ave until around 8pm according to @sfpd. Officers still processing collision that injured two pedestrians. #SanFrancisco pic.twitter.com/b8oPFS7QL2

"As soon as I looked back and saw that my kids were okay, they weren't dead, like, I got them out of the car and then I ran over to see the guy that got hit because he flung about 10 to 15 feet," said King.

That pedestrian, a 79-year-old man, is now in critical condition. He underwent surgery for internal bleeding, while a 66-year-old man is recovering from a broken rib and a punctured lung.

As for the truck driver, police detained him while they waited for a Cantonese translator, but it appeared officers had a pretty good idea of what happened early on.

Police say the driver of the truck was on 21st Avenue when he entered Geary Boulevard. According to what officers could tell from security video, the light was red.

.@sfpd detained driver of truck that injured two pedestrians and hit two vehicles. He told officers he lost control as he was going south on 21st Ave. at Geary Blvd. #SanFrancisco pic.twitter.com/s7YgdykTly

When asked if he was speeding, SFPD Sgt. John Bragagnolo replied, "It appears so but we really can't tell from the video, but we do know at least we believe it was against a red light."
Report a correction or typo
Related topics:
san franciscopedestrian struckpedestrian injuredpedestrianscrash
Copyright © 2022 KGO-TV. All Rights Reserved.
TOP STORIES
How concerned should you be of new omicron subvariant BA.2?
Snapshot of 49ers' memory-keeper during 2021 playoff run
COVID-19 updates: SF to change indoor mask rules
Teen loses thousands on Zelle after getting offer to be a 'sugar baby'
SFPD links 6th death to 'The Doodler' serial killer, increases reward
Expert explains why new COVID variants may keep popping up
WATCH TOMORROW: 49ers-Rams NFC Championship Game preview
Show More
49ers-Rams NFC Championship could break ticket record
Oakland's own Amy Schneider reflects on historic 'Jeopardy!' run
California representative pushing for 4-day workweek in new bill
NatGeo debuts 'Into the Depths' podcast on search for slave shipwrecks
7-year-old SF girl and mom pray for miracle to avoid eviction
More TOP STORIES News