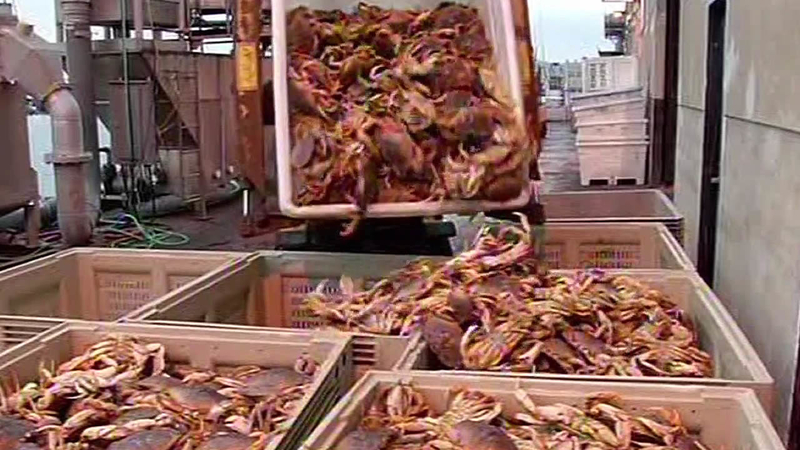 SAN FRANCISCO (KGO) -- If you are hoping to eat crab on Thanksgiving, you'll love this. Crab boats are coming back absolutely loaded to the gills. The only downside is that huge catch is creating a few challenges.

Since the beginning of the commercial crab season began on Saturday, an estimated 400 boats have been delivering a steady stream of crab to Pier 45.

"We stayed until 2 or 3 last night," president of the Crab Boat Association Larry Collins said. When we asked him how much sleep he got, he replied, "Not much."

Many boats have been parked in the bay waiting to deliver. Crews are pumping in oxygen to keep their catch alive.

"We just don't have the facilities here to unload any more than we are," skipper Dan Hunt said. He explained in the meantime, "We just sit on crab. Pump on them, keep them alive until the market can take them."

"It doesn't look like there's much crab in Eureka, Crescent City or Brookings, so everybody and their brother came down for this opener," Collins said.

Skipper Brian Kelley and his crew, from Fort Brag hauled in 30,000 pounds in the first three days. This all amounts to plenty of overtime pay for Juan Cornejo who straps rubber bands around the claws of the Dungeness crabs and gets his share of pinches. He said it happens twice a day.

The crabbers are getting $3 a pound and by the time it's shipped, boiled, cracked and put on your plate at the restaurant, the price is about $10.95 a pound.

"Yeah, a lot of good crab this year. It's all 2.5 pounds or bigger. Usually, they're about a pound and a half to two," C.J. Green form Alioto's restaurant said.