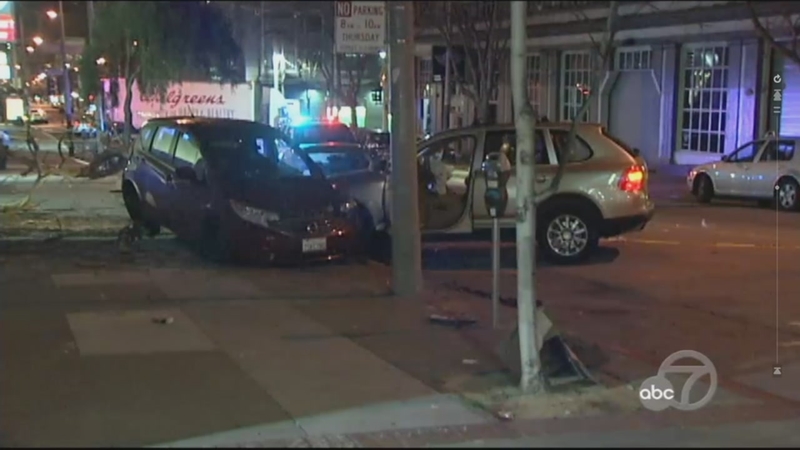 SAN FRANCISCO (KGO) -- What began as a report of a car crash near the Civic Center area is now a homicide investigation after the driver who smashed into others was found to have been shot in the head.

The big question right now for police is was this a random shooting or was this man targeted just blocks away from city hall?

The scene looks like just a car crash. A Porsche Cayenne SUV slammed into some parked cars on Eddy Street near Van Ness Avenue in San Francisco at 2:15 a.m.

It left a big mess behind and the driver with head trauma. But what wasn't obvious at first, became clear once police took a closer look.

"Upon further investigation, it was discovered he had a gunshot wound and was pronounced deceased on the scene," said SFPD Ofc. Jiselle Talkoff.

Police say the victim is a man in his early to mid-30s. They have no description of the shooter and no motive. Investigators are searching for witnesses and looking for some help from nearby businesses.

"They came in and were asking for video?" asked ABC7's Matt Keller.

"Yeah, but I didn't have access to the cameras so I told them to ask my manager," said Nick Shahi, motel employee.

The owner of a Nissan Versa says police woke her up around 6 a.m. to tell her what happened. She didn't want her face shown on camera, but made it clear police activity was not unusual in her neighborhood.

"To be honest I wasn't totally surprised. I've been living here for about 6 years. Something like this I'm just not. It's sad but I'm not shocked," said the Versa owner.

The name of the victim has not been released. This is the 8th homicide of the year here in San Francisco.