OAKLAND, Calif. -- Protesters against police killings have been marching through Oakland this afternoon, taking over Oakland City Hall, entering a Laney College cafeteria, and briefly blocking an on-ramp to Interstate Highway 880.

About 200 demonstrators gathered in Frank Ogawa Plaza starting at about 1 p.m. behind a banner adorned with the faces of black and Hispanic people killed by police over the last several years. 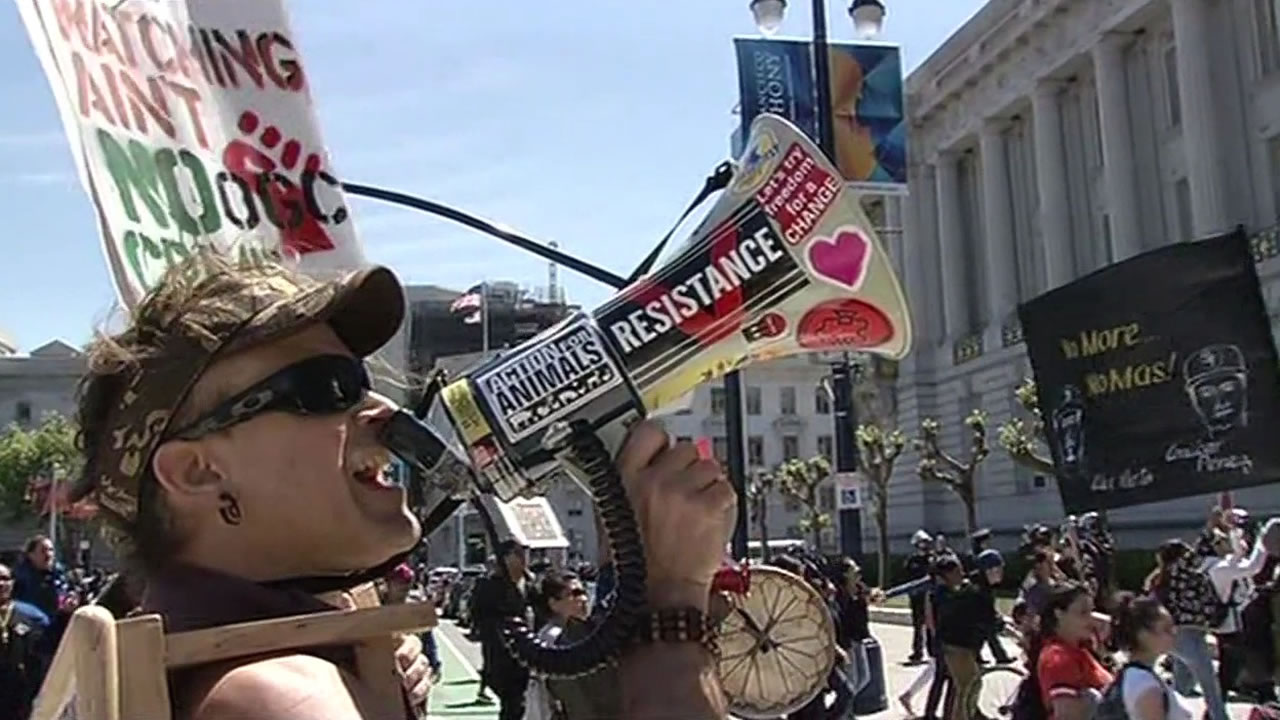 Protesters march through San Francisco; Six arrested
Six police brutality protesters were arrested on the western span of the Bay Bridge this afternoon.

Speakers linked the police shootings to the larger criminal justice system, which they said is racially biased, imprisoning black and Hispanic people at far higher rates than white people.

"I would love to see a movement that calls for disarming of the police entirely," he said, referring to the far lower rates of police shootings in the United Kingdom, where police do not typically carry firearms.

After numerous speakers, including several organizers with the Revolutionary Communist Party, the protesters flooded into City Hall, posing at the top of the stairs, blowing whistles that deafeningly echoed through the building's high ceilings.

They briefly occupied the City Council chambers, where more impromptu speakers addressed the issues of police brutality and institutionalized racism in law enforcement.

"It's obvious you need retraining," one woman said of the police, referring to less-lethal options like Tasers, pepper spray and tear gas at their disposal, " but the first thing you do is pull out a gun."

Protesters left City Hall on their own and began their march through city streets.

The crowd included students from several Oakland schools who staged walkouts today. As they marched through Chinatown, they stopped briefly by Oakland Charter High School at 345 12th St., claiming the school's principal, Eric Becker, had threatened to suspend students who walked out today.

A student named Jose who attended the protest with about 14 other classmates, said he received a call from his parents informing him of the school's threats. Eight of the students went back to school in response, he said.

But Jose said he wasn't worried about getting kicked out of school.

The protesters continued to the Laney College campus, entering and occupying a cafeteria and encouraging students there to join the march.

They then marched back downtown, briefly blocking the on-ramp to northbound Highway 880 near Jackson Street.

They arrived just after 3:30 p.m., running up an embankment behind a homeless encampment at the end of Alice Street, but California Highway Patrol officers prevented them from blocking the highway.

The protesters then continued back to city streets about 10 minutes later and were headed to Oakland police headquarters at Seventh Street and Broadway. They encountered few police officers on their way, approaching the department's front doors and taunting the officers inside.

They wrote on the sides of the building with chalk, calling the police "cowards" and "killers."

The crowd then proceeded back to Frank Ogawa Plaza late this afternoon.

Similar actions were taking place in San Francisco, Berkeley, San Jose and across the nation today in protest of recent police killings of unarmed black men.