According to San Francisco police, nearly 12 stores were hit at the same time by a mob of 80 to 100 people.
KGO
By Luz Pena 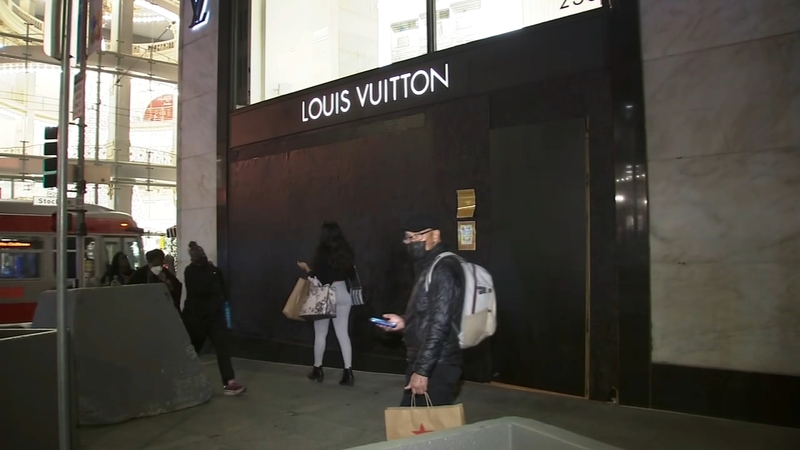 'Shocked' tourists respond to spree of organized thefts in SF

SAN FRANCISCO (KGO) -- Multiple windows covered with plywood tell a story of a city that lived through a spree of organized thefts in the heart of San Francisco's shopping district.

"We were shocked that it was so brazen," said Emily Tanner, tourist from Texas.

Emily Tanner and her family arrived to the city from Texas on Sunday. By Monday they knew about the mass robberies that happened in Union Square, the same place where they're shopping.

Elaine Dart drove from Chico to San Francisco to relax and was met with images of Friday's crime.

"It's uncomfortable. It makes me a little nervous," said Dart.

According to the San Francisco Police Department, nearly 12 stores were hit at the same time by a mob of 80 to 100 people.

In Union Square, the Christmas tree and the ice rink should be the main focus, but images of the mass theft have gone viral. The San Francisco Hotel Council is concerned this will be image people think about when they think San Francisco.

"When a crime like this occurs, it's obviously concerning to us as well. We would hope it doesn't have a long-term impact on our image of the city but it's a reality we have to deal with," said Kevin Carroll, Hotel Council Executive Director.

The Executive Director of the Union Square Alliance believes the large police presence is not only helping tourists feel safe, but retailers as well.

"It's helping considerably. It's been really nice to have such a strong show on behalf of the police department. They've leaned in immediately," said Marisa Rodriguez, Executive Director of Union Square Alliance.

As a response to this crime, the San Francisco Police department is planning to close several streets in Union Square.

At the end of the day it's all about perception.

"When we think about San Francisco, we think of the tourist things that we want to do like Alcatraz, the Golden Gate Bridge and Union Square," said Tanner.