'No one needs to be sick': In SJ, some NYE countdowns impacted by COVID-19 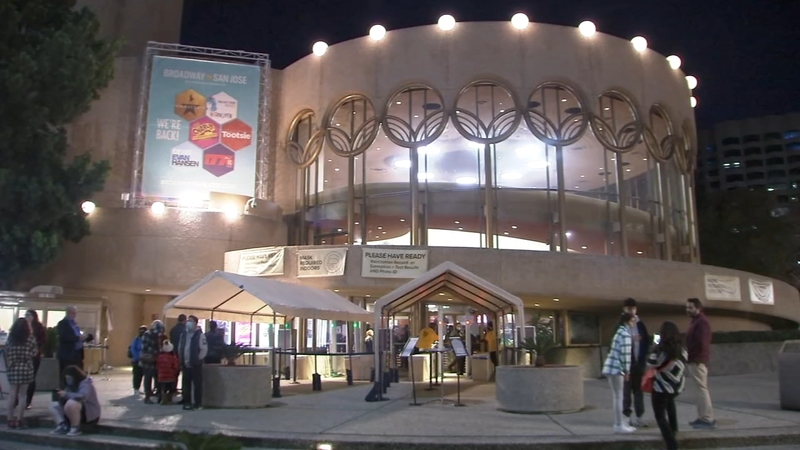 How COVID is impacting NYE countdowns in San Jose

SAN JOSE, Calif. (KGO) -- In Downtown San Jose on Thursday night, "A Magical Cirque Christmas" welcomed a packed house at the Center for the Performing Arts.

Gretchen Feyer, Broadway San Jose's General Manager, said all 2,493 seats were sold for the one-night show. However, not without a wave of calls and concern before curtains went up.

"They wanted to know if we were having a show, if everybody was good, and they just wanted to get an idea of what's happening," Feyer shared.

She said the company has taken steps to address COVID-19, even stopping food and beverage inside the theatre to make sure there is no excuse to take off your mask.

Feyer admitted there were a few who decided not to attend the show, due to the spike in COVID-19 cases.

Signs on several businesses warn the surge in cases is cancelling countdowns and putting a stop to celebrations.

"I'll usually cover their shift," Bouren told ABC7 News. "One of the problems is I tested positive myself. So I'm sitting here quarantined."

"I've been sitting in my living room by myself for a week," he said.

When Bouren and his team made the decision to cancel the bar's New Year's Eve celebration, he said the choice to shutdown was less of a business decision, and was more about looking out for the health and well-being of his staff.

With the omicron variant starting to surge, some San Francisco bars are making a difficult decision to close temporarily through Jan. 1.

Pre-pandemic, NYE celebrations at Haberdasher involved a buffet, a band, and several hundred people who come through the venue over several hours. However, he said current data on transmissions and positive cases are proof the business can't host for the holiday.

Bouren acknowledged, "These are the busiest times of the year for bars like ours, and to lose all that revenue- not just for the business, but for the staff- it hurts."

However, halting plans is not the case for everyone. Just across the street from Haberdasher, a marquee with the message: "New Year's Eve, DJ Dance Party."

In the Downtown core, Christmas in the Park organizers explained the outdoor element is allowing them to continue with New Year's Eve activities.

Some large-scale New Year's Eve celebrations aren't canceled and doctors are concerned they will be super-spreader events that fuel the omicron surge.

"This year, we have a couple of magicians performing a few different magic shows for the whole family between 7 and 9 p.m. on our main stage. And then at nine o'clock, we'll do an East Coast countdown," Christmas in the Park Executive Director Jason Minsky shared. "So if families want to kind of get home safe that night, not have to fight the crowds or anything they can do so."

He said at about 9:30 p.m., a live band is scheduled to perform until after midnight. There is also a midnight countdown.

Minsky anticipates the Omicron variant might only impact the number of visitors.

"The ones that feel safe and feel comfortable will come out. The ones that don't though, they'll probably stay home," he told ABC7 News. "It's hard to determine how many people are actually going to be there."

RELATED: Many Bay Area residents opting out of NYE plans over COVID fears

Many who spoke with ABC7 News about their NYE plans said the rise in cases will mean a quiet night in.

"Everybody's got to go back to work on Monday, so no one needs to be sick," Fresno resident Elizabeth Morgan shared.

Los Gatos resident Mark Wagner said he plans to stay home. Adding, "Even if it's less deadly- more transmissible... I just don't want to get anything."