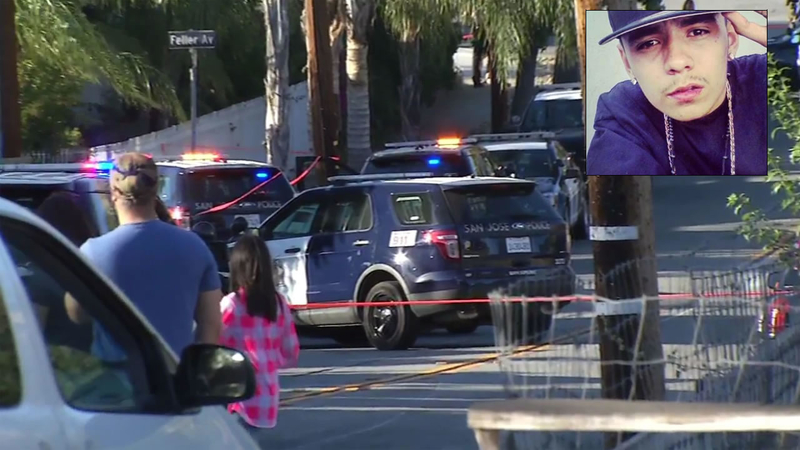 SAN JOSE, Calif. (KGO) -- Members of a San Jose family are questioning why police had to shoot and kill a loved one Monday night instead of allowing them to intervene.

San Jose police believe they did their best when they were called about a despondent teenager, Anthony Nunez.

Relatives say Nunez, loved sports and enjoyed singing and rapping, but for some reason, he got his hands on a gun and fired it towards his head. An hour later, he was dead after police shot him.

"My son's gone," said a sobbing Sandy Sanchez. Her words and her emotion conveying the hurt she is feeling.

Late Monday afternoon when San Jose police were called to a Feller Avenue house because someone inside was despondent. It was 18-year-old Nunez, who already had grazed his head when police say he pointed a handgun at his head.

"As the officers were approaching on scene, and the subject came out of the residence, the officers did not want to force a confrontation, which is why they tactically retreated, and why in these instances quite frankly, time is on our side. They wanted to slow it down. They did a good job of slowing it down," said San Jose Police Chief Eddie Garcia.

Officers spent 14 minutes trying to convince him to give himself up. That's when Chief Garcia said Nunez pointed the gun at officers and two officers, with rifles across the street, shot him.

Nunez died later at the hospital.

As they mourn, relatives of the popular young man say they're hearing from neighbors they believe Nunez was not armed.

The officers were not wearing body cameras, which are just starting to be issued in San Jose.

"If he was suicidal, why not let the family talk him out of it? If he would have saw us, which they didn't let us come close to talk to him, it could have been prevented," said Nunez's cousin.

The incident will be reviewed by the independent police auditor, the district attorney and police internal affairs.

A Go Fund Me account has been set up to help the family pay for his funeral.