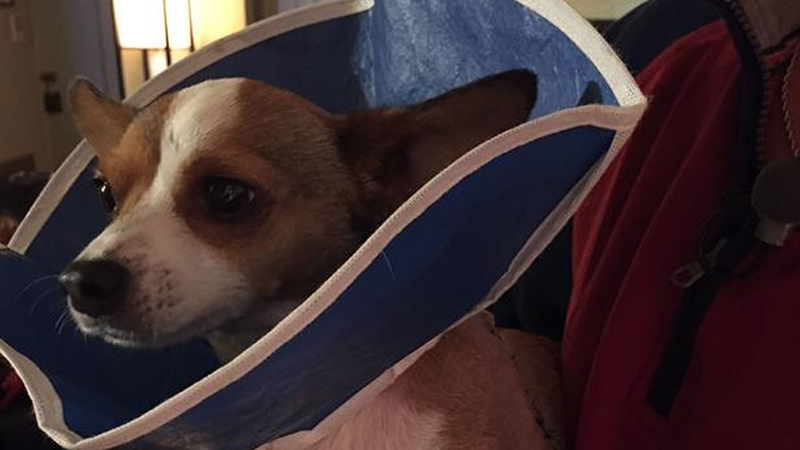 SAN LEANDRO, Calif. (KGO) -- A local man on a walk along the water was mauled by two pit bulls and they were later put down by San Leandro police who are now searching for their owners.

The victim describes the terrifying ordeal said he thinks the dogs were set loose on purpose.

San Leandro police are still looking for the person responsible for letting loose a pair of pit bulls that attacked Larry Osborne and his two rescue dogs, Margo and Mia.

"This attack, which lasted probably about five minutes, was the most vicious thing I've ever encountered," Osborne said. "Leashes in my hand. I can't get my mace. I can't get my knife. I'm in the middle of a battle right away."

A battle that left the three of them hurt, and Margo with the most serious injuries.

"The pit bull had her right here in his mouth and was shaking her like a ragdoll," Osborne said.

Larry Osborne's two dogs were attacked by two pit bulls while he was walking them at the San Leandro Marina.

Larry says after one dog bit Mia, the other went straight for Margo, locking her in his jaws and not letting go.

"The dogs knocked me down into an embankment like a little levy," he said.

It wasn't until guests at the nearby Marina Inn ran over to help, beating the dogs off with chairs and tables, that the pit bulls finally let go. Witnesses told police they saw the pair of pit bulls come from a blue Toyota pick-up. They're hoping surveillance video will provide clues.

The Daly family walks a stretch of Marina Park with their dogs regularly looking out for them and each other.

"If their dog is aggressive, they should keep them on a leash at all times because they could attack somebody," said Bridgette Daly.

Police eventually shot and killed both pit bulls after they moved to attack an officer responding to the 911 call.

Larry says he refuses to live in fear and will return to the Marina as soon as Margo and Mila are healthy enough to do so.

"The next time I walk I will have something with me that can I protect them in any situation," he said. "This will never happen to me again."
Related topics:
san leandropit bull attackanimal abuseattackanimaldog attackanimal attackpolice
Copyright © 2021 KGO-TV. All Rights Reserved.
TOP STORIES
Omicron likely to push back return-to-office dates, experts say
Man who attacked 84-year-old in SF earlier this year released
LA County reports its first case of omicron COVID variant
How omicron variant is changing holiday travel plans
Will travel insurance cover you if you catch COVID abroad?
Dickens Fair returns with COVID safety changes
Things to do in the Bay: Deck the Halls pop-up bar, SF Youth Ballet
Show More
Proposal to offer $50K signing bonus to attract officers to OPD
SF's criminal case backlog called 'humanitarian crisis'
How Tom Brady landed on call with Michigan high school basketball team
California's water districts to get 0% of requested supplies in 2022
COVID updates: Hawaii latest state to confirm omicron case
More TOP STORIES News