KGO
BERKELEY, Calif. (KGO) -- Detecting milk spoilage hasn't seen much innovation since date stamping began in the 1930s, but a team at the University of California Berkeley thinks it's found a better way.

"I can never tell if the milk is spoiled," said Casey Glick, a graduate student at UC Berkeley. "I have to hand it off to someone else, who frequently can't tell."

"The sell by date isn't an absolute. Milk can be good for a day after it, or weeks after the sell by date. It depends on the individual carton," Glick said.

UC Berkeley students say they replace the conventional cap with the smart cap.

The smart cap is electronic, but it doesn't need batteries.

"You just flip over and let milk get trapped a little bit, I mean in the smart cap," Yang said.

The electricity comes from the reader that could eventually be built into a smartphone. It passes a tiny radio signal through the milk stuck in the cap and measures what comes back.

"The drop of the electrical signal is indicating the milk gets spoiled," Yang said. "We believe that's because the growth of the bacteria is gradually changing the electrical property of the milk."

It might be a little while before these high tech caps replace the old fashioned sniff test. That's because these are made with a brand new 3D printing process, and right now, each one takes about nine hours to make.

The printer uses two materials, plastic and wax. The plastic is the structure, the wax is later melted away to make room for the circuits.

"So you have to figure out how to get the wax out and then get the metal in," Glick said.

The researchers are working hard to make the process quicker and cheaper, so they'll never have to rely on the sniff test again.
Related topics:
scienceuc berkeleyberkleyhealthtechnology3d printingconsumer
Copyright © 2020 KGO-TV. All Rights Reserved.
RELATED 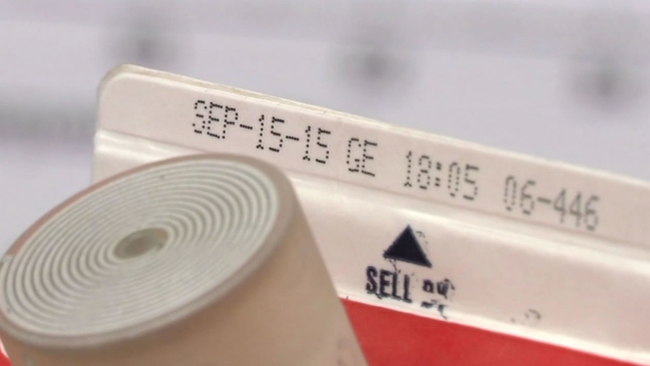