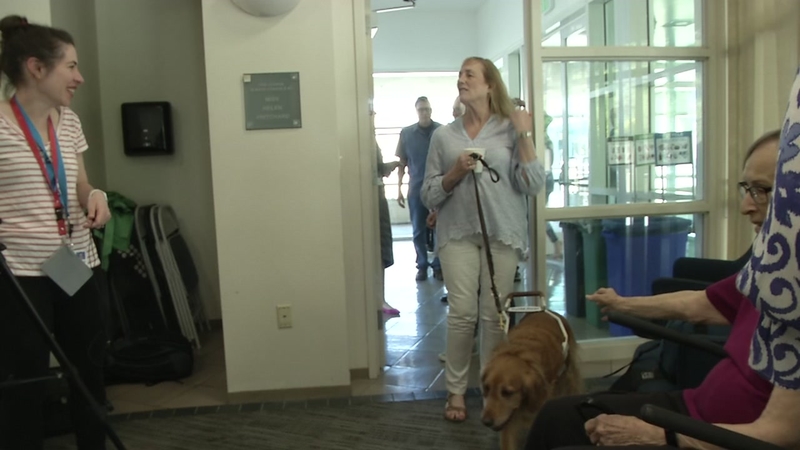 SAN FRANCISCO (KGO) -- For Lynda Johnson, walking into a small room at UCSF could be the light at the end of a life-long tunnel. Her vision began slipping into darkness at an early age, from a condition known as Retinitus Pigmentosa.

"You're legally blind because the fields are narrow. Then with mine it just kept closing down, down, down," says Johnson, who holds her hands to her eyes like a narrowing telescope.

But in a moment Lynda could get the chance to see light again for the first time in decades. The camera glasses she's put on are part of a system developed by the company Second Site.

"This device is an electronic chip that delivers little electronic impulses to the inner part of the retina, to have patients in response to a video camera see, to begin to see, some impressions of light," says Dr. Jacque Duncan, M.D.

We first met Dr. Duncan nearly a decade ago, when she and her colleagues at USCF were spear-heading clinical research into the system. It relays signals from the video camera in the headset to a tiny strip implanted behind the eye. The signals essentially bi-pass the retina and stimulate the patient's optic transmitters directly.

"Some of them cannot see any light at all, so with this device when they can see some light, it's a tremendous improvement for them," says Dr. Duncan.

After years of development, the Second-Site system has gained FDA approval. And now, it's available to patients through selected sites, like UCSF. Since patients must train their brains to interpret the signals, Johnson isn't sure what to expect when a technician flips the switch for the first time since her implant.

With her family watching with excitement, Lynda explores the edges of light and darkness -- the borders of her new world. At one point she notices large squares of light above here, the glow is emanating from the fluorescent fixtures on the ceiling.

By distinguishing contrast, Lynda can begin to interpret shapes, like her own mother's hand. Ultimately, she has another family member in mind too.

Lynda will work with doctors on interpreting the impression of light now reaching her senses, and looking forward to a brighter future.