SAN FRANCISCO (KGO) -- A woman attacked as she tries to get into her apartment building near the Embarcadero and video captured the entire incident. The suspect a homeless man.

It's a case that has ignited a heated debate over how to deal with San Francisco's homeless.

Yesterday, that woman was in court to testify against her alleged attacker and emotions ran high.

The prosecutor played the security camera video, showing Paneez Kosarian at the front entrance of her apartment building on Aug. 11. As she tries to enter, she's attacked-- allegedly by Austin Vincent.

Vincent was arrested later that night.

Kosarian was the first prosecution witness Tuesday. She testified that Vincent was standing outside the entrance doors, appearing upset and yelling at the front desk receptionist. She said she spoke with him for about six minutes, trying to understand what he was saying.

Kosarian says he told her not to enter.

"Everybody is a robot," she said. "But not me. I'll save your life. I want to kill the lady inside because she's a robot."

Kosarian testified that when she tried to get inside the building, he became aggressive and physical.

"I was fighting for my life-- crawling into the apartment. He was hurting me, grabbing my arm and pulling my leg."

Paneez Kosarian was trying to get through the front door of her apartment building when a man grabbed and pulled her outside. The same surveillance camera that captured the attack also shows the San Francisco resident trying to get inside for almost three minutes.

Kosarian says she had bruises on her legs, hands and left side of her body. She finally got into the building with the help of the receptionist, who came to her aid.

When Kosarian was asked, how did you feel afterwards she broke down and cried on the stand.

Prosecutor Melody Bahai played four 911 tapes, all of them called in by the receptionist during the assault. In the fourth and final call, she pleaded with the dispatcher to send police immediately.

"When victims come forward and testify in court, we recognize how courageous that is," said DA spokesman Alex Bastian.

Austin's lawyer Public Defender Saleem Belbahri says it is clear his client was having mental issues.

"Bottom line is Austin was in treatment prior to being taken into custody and he was doing well in treatment."
Report a correction or typo
Related topics:
san franciscoassaultattackhomelesssfpdwoman attacked
Copyright © 2021 KGO-TV. All Rights Reserved.
RELATED 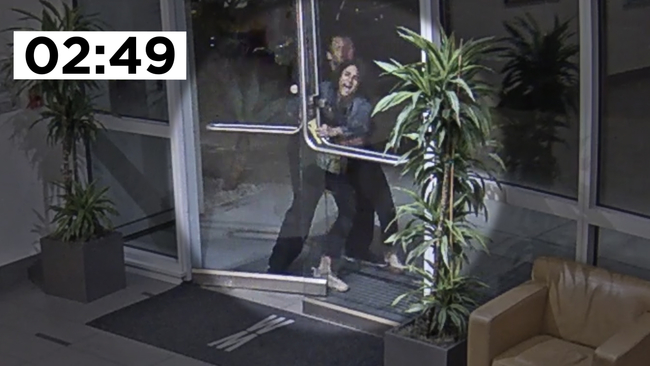