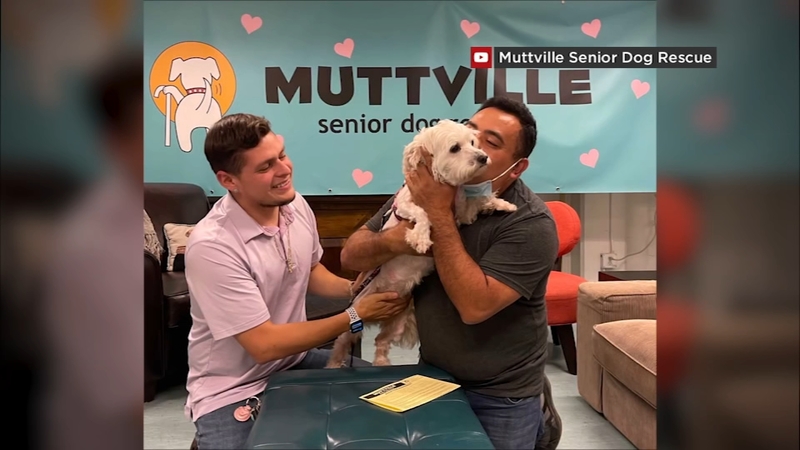 SAN FRANCISCO -- After an epic five-hour chase across train tracks and around parked cars by four officers near San Francisco's Oracle Park, plus some intensive detective work, Nieve, a fluffy white terrier mix, was reunited with her family Friday.

The case began when the animal control unit got a call about a small white dog on the train tracks at Fourth Street and Townsend streets on July 7, according to Deb Campbell, a spokeswoman for San Francisco Animal Care & Control.

Four Animal Control officers raced to the rescue, but the frightened dog apparently mistook them for dognappers and fled. She eluded Capt. Amy Corso, Lt. Ellie Sadler, Officer Rebecca Fenson and Officer Shane Jolley for five hours despite her senior status as an 8-year-old dog, according to Campbell.

Finally trapping the dog behind a parked car, the officers scooped her up in a net and brought her to the city animal shelter. After following the usual procedures for lost animals, the senior dog was transferred to next-door neighbor Muttville Senior Dog Rescue in San Francisco's Mission district.

And then the miracle took place.

The dog looked familiar to Alice Ensor, an adoption counselor at Muttville, and she combed social media for lost dog posts that went up around the time Animal Control picked up the dog, according to Patty Stanton of Muttville.

The counselor found a lost dog alert that had been posted around that time for a white terrier mix named Nieve who escaped or was stolen July 6 when her owner, a Vallejo man named Carlos, was working in Mission Bay, Stanton said.

On Friday, July 23, Nieve was reunited with Carlos and his son.

"It's amazing someone didn't take her home, or she didn't get hit by a car. But most people have a good heart and someone must have said, 'Let's call the shelter," said Stanton.

How did Nieve's journey end up?? Watch the #happy #reunion! Carlos & Nieve = together again! pic.twitter.com/453RitKJQQ