KGO
By Lauren Martinez, Cornell Barnard
SAN FRANCISCO (KGO) -- A fire engulfed a warehouse at Pier 45 on San Francisco's Fisherman's Wharf early Saturday, sending a thick plume of smoke over the waterfront and threatening to spread to a historic World War II-era ship before firefighters brought the flames under control.

A total of 150 firefighters and 50 fire apparatus responded to the scene. One firefighter was injured in the fire with a severe laceration to the hand and transported to a local hospital.

The flames were intense, jumping 100 feet into the early morning sky and a rear portion of Pier 45, fully engulfed.

A San Francisco resident captured the bright flames and huge smoke plume from a four-alarm fire burning at a warehouse at Pier 45 in San Francisco.

People from across the city captured video of the blaze which started in the early morning and 150 firefighters were battling to put it out.

The fire left haze and plumes of smoke over San Francisco and could be seen from other parts of the Bay Area.

The SFFD says the fire was burning above and below the historic pier, made of concrete and wood, built in 1926.


There were tense moments on the Bay as the fireboat St. Francis fought to save the historic WWII ship, the SS Jeremiah O'Brien from ruin. She was docked just feet from the fire.

"If there's anything positive, we were able to save the Jeremiah O'Brien, now with more emphasis on Memorial Day," Baxter added.

The ship, which is one of two remaining fully functioning Liberty ships launched during World War II, stormed Normandy on D-Day in 1944. The ship docks by the pier and is a popular tourist attraction.

"Our firefighters absolutely saved the SS Jeremiah O'Brien during this fire as flames were pinching on the side of this vessel," said Baxter.

The ship's captain was beyond grateful.

"It sounds corny but that was my reaction - it's a miracle, that's because of the fire department, " said Capt. Cavan Lesieur.

A seafood distributor at Pier 45 said on Instagram Saturday morning that the fire has caused about $15,000 in damage. The fire damaged trucks and equipment at Water2Table, which receives and distributes fresh fish to Bay Area businesses.

Joe Conte with Water2Table spoke to ABC7 and said the fire could be "disastrous for the local fishing community."

Conte said because of the COVID-19 pandemic, Water2Table is distributing food directly to consumers.

"This is critical," he said, adding that there are about 15 businesses like Water2Table along the wharf.

VIDEO: View from SKY7 of a 4-alarm fire burning at a warehouse at Pier 45 in San Francisco
EMBED More News Videos

SKY7 view of fire crews trying to put out 4-alarm fire at a warehouse at Pier 45 in San Francisco.

He adds that fish from Fisherman's Wharf is shipped state and nationwide.

"I'm hoping we can get on to that pier soon," he said.

Conte said another concern is that the power is out along the pier. He said there is "millions" of dollars worth of fish in facilities along the pier.

Mitch Gronner works for Aloha Seafood. He was inside the warehouse when the fire broke out and said it was only the size of a camp fire, and then exploded.

Randy Quezada, Director of Communications for the Port of San Francisco, said Pier 45 has four structures, which are called A, B, C and D sheds. C was destroyed. Quezada said there was still power in some parts.

"We didn't lose B and D where the fish processing units are. In fact we didn't lose power which is important. So any fish they had to keep on ice is still cold," Quezada said.

He said since the integrity of the pier is still up in the air, boats that would normally come and unload their catch need to hold onto them for a couple more days.

Tyler Foster, Executive Vice President of the Red and White Fleet, said it felt surreal to get the call at 4:45 a.m. that the pier was on fire.

"It sort of feels like the triple whammy," Foster said.

They ceased operating their boats on March 16 under the shelter-in-place order.

"We, unfortunately, had to let go of the majority of our staff shortly thereafter. And now this. We'll get through this, what we really need is to get back out on the Bay and get people back on the Bay again," Foster said.

He said once they get to reopen, it will be up to San Franciscans and locals to go out onto the water.

"We're trying to understand where we sit in the phasing. What we do is an outdoor activity. We take people out on the Bay and the air doesn't get fresher," Foster said.

It's unclear what ignited the flames and investigators are now working to learn the cause and origin of the fire. Officials are looking at surveillance footage.

According to Baxter, evacuations were underway at adjacent commercial warehouses during the fire and his crews were evacuated when walls began collapsing in the warehouse during the fire fight.

"To our knowledge nobody is supposed to be in the building and we are hoping that there is no victim," he said.

The warehouse, which holds fish processing equipment and a few offices, is typically unoccupied at night. But Baxter notes homeless people have been seen in buildings and warehouses in the area.

Authorities are also looking at the structural integrity of the pier to make sure it is safe. 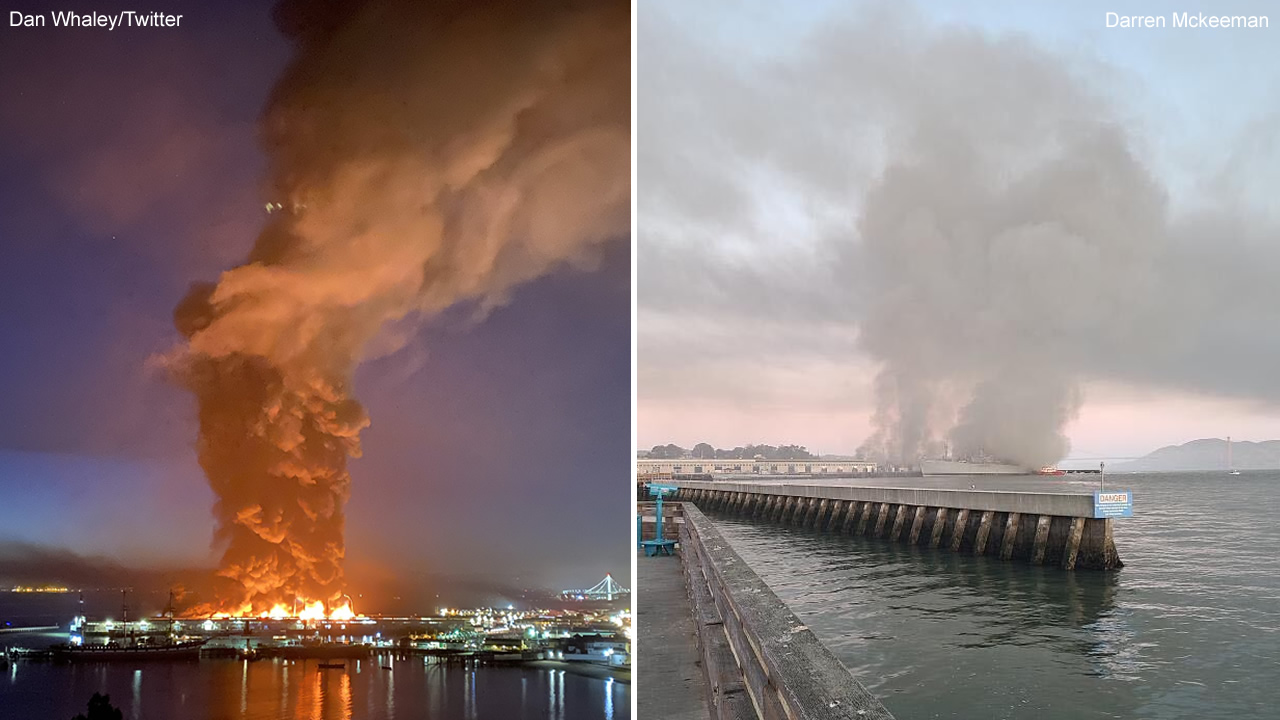 Bright flames and smoke are visible as a fire burns at Fisherman's Wharf in San Francisco on Saturday, May 23, 2020.

If you smell or see haze, you're not alone. Smoke from a #fire burning at San Francisco's iconic Fisherman's Wharf is being blown across parts of the Bay Area. Latest updates here: https://t.co/xeykQyvRJJ pic.twitter.com/r5lcVGHLpX

San Francisco fire officials give an update on the four-alarm fire that threatened a historic ship from World War II that's docked at Fisherman's Wharf.

SF Firefighters working at a 4th alarm #fire at Pier 45. All questions go to @SFFDPIO pic.twitter.com/LkwpvaAwcu

Crews are battling a four-alarm fire burning at a warehouse at Pier 45 at Fisherman's Wharf.