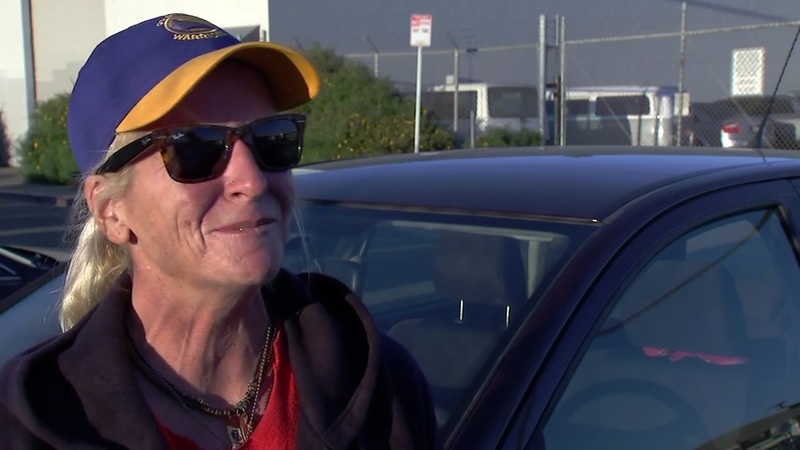 OAKLAND, Calif. (KGO) -- The future is bright for 54-year-old Jane Parisi, once homeless and living in her car in Oakland while working two jobs but unable to afford rent.

"Sometimes, when you're in a situation like mine, you give up, I was at that point," said Parisi.

ABC7 News first told you her story in October.

An anonymous donor saw Jane's plight and gave her a 2004 Scion to replace her old car with a failing transmission.

But that's just the beginning.

The owner of Marin Color Service in San Rafael also saw Parisi's story on ABC7 News and thought she looked familiar. "I yelled at my wife, 'Hey I know that girl!'" said Tony Galatolo.

Galatolo remembered she had once delivered paint supplies to his store. He just offered her a full-time job with benefits.

"She was deserving, the type of person I could feel she was. Amen. We all deserve second chances," Galatolo said.

As luck would have it, fellow employee Wendy Velasquez had an extra room to rent in San Rafael. Lucky the chihuahua is part of the deal.

"I felt it was time to pay it forward," Velasquez said.

"This is huge for me," Parisi said.

"You're deserving, you're great. You're going to be a great addition to our family," Galatolo said.

"I want to thank everybody that donated and Channel 7 News, which was part of this," Parisi said.

It's a new job that is now giving Parisi an escape from homelessness. "Where I'm going to be making more money and I won't have to work two job," she said, laughing.

Jane's friend has set up an online donation account.

Visit this page to make a donation.