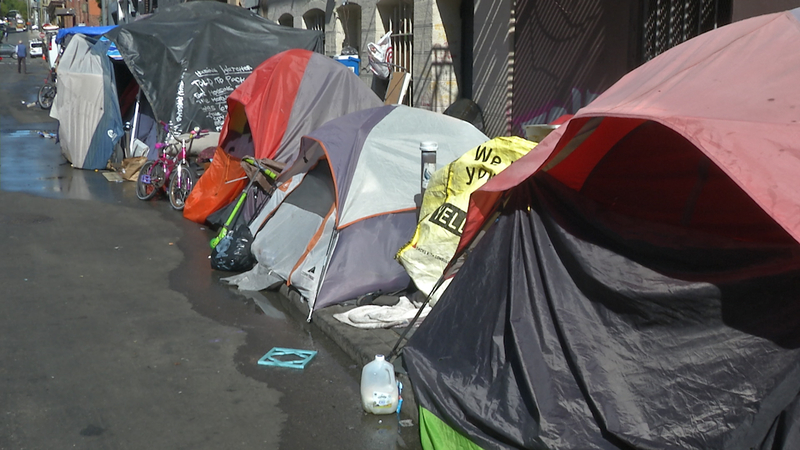 SAN FRANCISCO (KGO) -- When shelter-in-place orders went into effect, the number of people living on the streets in one San Francisco neighborhood grew 400%. It took months for the city to take action, and things have improved some, but as we found challenges remain.

Tensions are running high in San Francisco's Tenderloin District, a war between the housed and the unhoused.

Residents on Willow Alley say they feel threatened by the people living on their street.

While we were talking to some local residents fed up with the number of homeless outside their windows, a man yelled at us.

"Imagine what is going to happen to you, when they see this on the news," he said. We asked, "Are you threatening them?"

"Yes he is," said neighbor Dee Lefrak. "This is what I was telling you. We live in fear and nobody cares."

"This is the shelter-in-place slum," said Lefrak.

Navarro tells us that living here has become difficult.

"It is unrelenting," said Navarro. "I can't sleep at night, I can't work during the day, I wear noise-canceling headphones when I work from home and I have to have the volume on full blast.

The number of homeless people in tents is soaring during the coronavirus pandemic and that's putting intense pressure on some San Francisco residents. One family could not get help from public officials, so they turned to the ABC7 I-Team.

Lefrak and Navarro say they don't feel safe in their neighborhood. People have broken into their building, and drug dealing and drug use are rampant.

"In the last 10 days, I myself have witnessed, from my window two overdoses, right by our garage door," Navarro said.

Lefrak added, "We are under siege, and this is blocks away from city hall."

The people who live on this street say, they don't feel safe either.

Beyond the challenges of living outside, they say residents in the nearby buildings have acted out, pouring water on them from the windows above, and running over their tents with cars.

"They tried to pull into their garage, and they started yelling at the fact that the tents were kind of close to the garage, so they pulled in, they pulled out, and pulled in and then went over it," said a man named DJ, who told us that he has lived on the streets for seven years.

When the I-TEAM walked the streets of the Tenderloin in May the neighborhood looked more like a third world country than a world-class city. Tents had taken over the sidewalks on nearly every street.

An I-Team analysis of 311 data since the pandemic began shows, the neighborhood was overwhelmed with encampment complaints. City officials told us they could NOT move the tents because CDC guidelines prevented it.


App users, for a better experience, click here to view the graph in a new window.

"The people who live here are vulnerable during this pandemic and are generally more vulnerable even when there isn't a pandemic, they are older folks, they are families, they are kids," said Haney.

Haney says the city only took action after the University of California and a group of local business owners sued San Francisco.

"It shouldn't take a lawsuit for the city to do its job. That's what we were saying from the very beginning. But we put together a plan, particularly the hotel program that allowed the city to have a response to turn too when the lawsuit did come up," said Haney.

He showed us the progress that has been made, walking us around the neighborhood.

On one street he stopped to point out where tents once lined the street, "this corner right here was full of people in tents," he said.

Last week, the city's homeless outreach team finished clearing most of the homeless encampments, moving them into hotels.

Back on Willow Alley, residents are still waiting for a resolution. We counted 23 tents on the day we walked the street. We also found many people frustrated that the city hasn't solved the problem altogether.

We asked a woman who said she's been on the Willow Alley since December if the city offered her a hotel room? "No. Our alley for some strange reason, this alley and the next street over have been skipped," said the woman who identified as Wendy.

That angers Navarro too, "The most frustrating thing about this, is that somehow this gets framed as a situation that pits people who are housed versus people who are unhoused. You know I recognize that these people are victim. This is a failure of leadership."