His visit was interrupted by the news that 11 people were dead and six others injured after a synagogue shooting in Pittsburgh, Pennsylvania.

His brother, a practicing Orthodox Jew, lives in the Pittsburgh community where the shooting took place.

"Having a brother living there, it touches home and I want to make sure he's safe," Moritz said. "But really, it's a whole community of people and a whole country of people that should be affected by this."

Hundreds of people were also grieving outside of the Contemporary Jewish Museum in San Francisco. A vigil was held there Saturday night to honor the lives lost in Pittsburgh.

"It was not a question of whether it was going to happen, but when," Ronnie Moas said.

"There's a launch of hate," Rabbi Sydney Mintz said. "It's not just rhetoric. It's actually an action."

The discussion Saturday night outside the museum was centered around how to fight back against hate.

The group, led by Rabbi Mintz, believes the change starts through knowing your neighbors and maintaining hope.

"We need to work together to move this country back from insane, back to humane," Rabbi Mintz said.

In Berkeley, a similar message was echoed. Mayor Jess Arreguin was among the speakers.

The crowds applauded the calls to love and support one another. But there were others among the groups calling for something more tangible in November.

"Take a stand on Election Day," Moas said. "Elections matter. You can't just post on Twitter how upset you are." 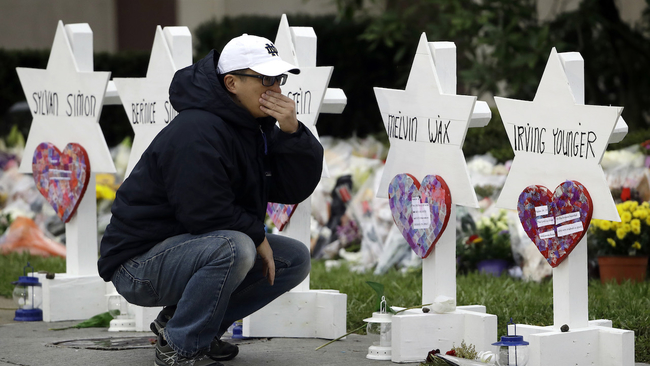