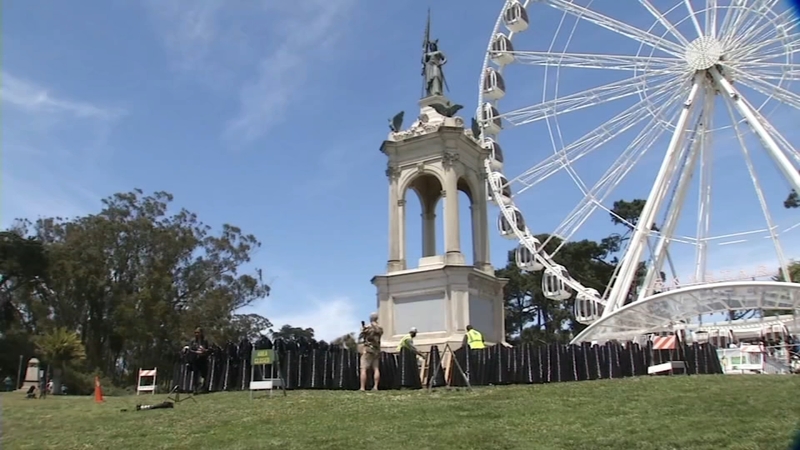 SAN FRANCISCO (KGO) -- Nearly one year ago on Juneteenth 2020 a large group toppled the statue of Francis Scott Key that stood in Golden Gate Park for more than a century.

The monument to the author of "The Star-Spangled Banner," a known slave owner, came down with several others across the city making way for what Oakland-based artist Dana King calls a "monumental reckoning."

In Golden Gate Park, hundreds of people gathered for a ceremony and unveiling of a new sculpture installed at the base of a toppled statue.

King is known for her work capturing the beauty of Black bodies in bronze and has created public monuments across the country from Montgomery, Alabama to New Haven, Connecticut.

Her latest project to be unveiled Friday on the eve of Juneteenth in Golden Gate Park, diverges from her primary medium of bronze.

More than 400 years after the first Africans were kidnapped in 1619 and sold into slavery in the Americas, 350 shoulder-height steel sculptures will surround the statue base that once held the monument to Key.

Each one represents one of the African ancestors that made the first horrific trip across the Atlantic.

For King, that means until the plinth is removed.

In honor of Juneteenth, we're telling stories of what Black freedom means today, from a 94-year-old's quest for a national holiday to the fight for reparations to cultural celebrations. Watch "Our America: Black Freedom."

For now, however, the monument is scheduled to be on display for the next two years in Golden Gate Park.

The installation comes at a time when the San Francisco Arts Commission is creating a monuments and memorials advisory committee to review all of the historic monuments in the city's art collection.

"It sends a message that it's a new day," said Ralph Remington, director of cultural affairs for the San Francisco Arts Commission.

"People get to see for the first time maybe what it feels like when people who have been discriminated against, who have been persecuted and demonized and vilified get to pass judgment ourselves," said Remington.

Before the sculptures made the trip to Golden Gate Park's music concourse they overflowed King's Oakland studio.

King's team of all-female creators took pride in crafting each detail like the braids at the crown of each sculpture.

Thirty-five thousand feet of rubber tubing was used to make it happen.

The artist plans on donating the tubing for reuse once the monument is taken down.

Love felt and received by friends of the artist who stopped by her studio for a sneak peak.

Hulda Brown, a woman in her 70s, stopped by to take in the sight before it's on display for the world to see.

"It's been a long time coming," said Brown. "Remember when they say human being that's all of us. We are one race - one human race."

"I hope that people when they come upon the installation they sit, they think about it, they commune with the ancestors, and that they have conversations with people that don't look like them," said King.

Monumental Reckoning will be unveiled to the public June 18 in a ceremony starting at 5:30 p.m.

The public is welcomed to attend the event at Golden Gate Park's Music Concourse between the de Young Museum and the California Academy of Sciences.