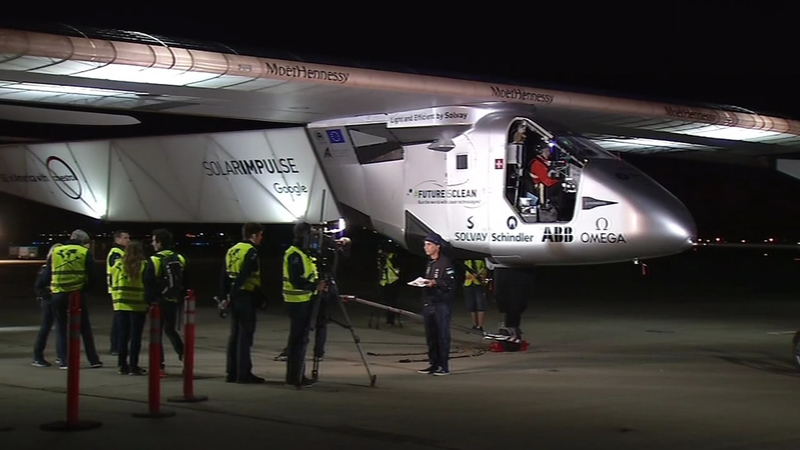 SAN FRANCISCO (KGO) -- The Solar Impulse 2 took off from Moffett Field this morning to continue its historic journey around the world. It's headed next to Phoenix, Arizona.

This is the first leg of the trip across the continental United States as the Solar Impulse 2 tries to become the first solar plane to circle the globe. It should land in Phoenix around 9 p.m. on Monday.

Crews had to push the plane to the part of the runway from where it took off.

It started in Abu Dhabi last year. The plane landed here in the Bay Area last week after flying from Hawaii.

The flight to Phoenix will take 16 hours. If you drove there from Silicon Valley, it'd only take about 10 hours.

They landed at Moffett Field less than a week and a half ago.

The plane is capable of flying day and night without fuel. It has 17,248 solar cells built into the wing. They power the four batteries that in turn power the four electric engines and propellers.

Solar Impulse says the plane could theoretically fly forever and is only limited by the pilot's sustainability.

"You know, flying this plane is addictive. You fly with no noise. You have no pollution. And you have the impression that you could make a jump into the future," said Piccard.

And looking into the future, the next leg of the trip will be to either Albuquerque or Kansas City, depending on the weather.

The Solar Impulse 2 team hopes to make it all the way back to Abu Dhabi by July.

Solar Impulse 2 being pushed into position for take off at Moffett Field.
Destination is Phoenix. pic.twitter.com/kSv9UAbOZO