KGO
By by Amanda del Castillo 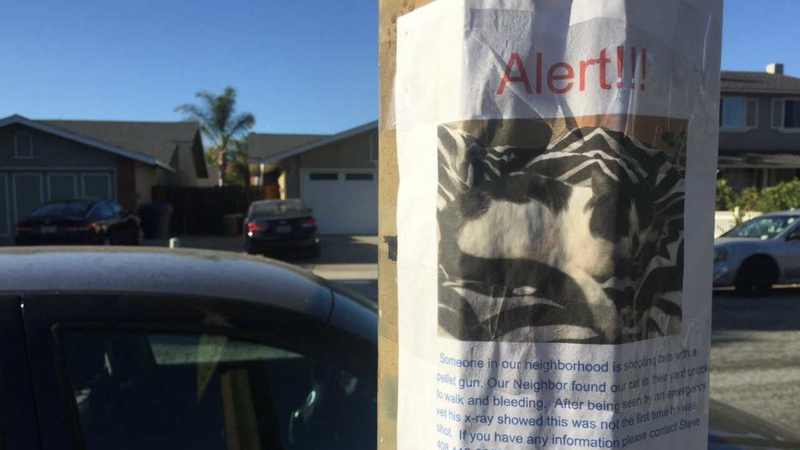 On Sunday, Lorraine Van Eaton was gardening in her front yard when she heard a cat's meow.

"It was Putter! But he wasn't putting put his foot down," she said. "He hadn't been there before, so he was obviously moving."

#ALERT Someone is shooting pets with a pellet gun in San Jose’s Parkview neighborhood. A neighbor found Putter, bleeding in her front yard. At the vet, doctors learned this was the SECOND time the poor cat was shot. A month-old pellet was also found in Putter. #abc7now pic.twitter.com/hI2bjfdLSx

Six-year-old Putter had blood stains on his white fur and was struggling to make his way home. His owners live next door to Van Eaton.

"When I scooped him up, he had blood on his white fur and I was very concerned," she explained. "So, I got my daughter and said, 'We have to get Putter home, something is really wrong.'"

Putter's owners, the Beyer family, then rushed their family cat to an emergency veterinarian.

Putter’s owners, the Beyer family, shared this x-ray. It shows pellet fragments lodged inside the cat’s body. A scab the family noticed a month ago was actually an older entry wound. The most recent shot missed Putter’s head by two inches and landed near his spine. Wow. #abc7now pic.twitter.com/lC7CuqXGLQ

To the family's surprise, x-rays revealed two pellets inside of Putter's body. Stephen explained a scab the family noticed about a month ago was actually another entry wound.

"Come to find out, it was another pellet," Stephen said. "So, there's definitely somebody local who's shooting animals."

The most recent shot missed Putter's head by two inches, and landed near his spine.

"His front leg's not operable. It's just not moving," he said. "So, we don't know yet. Time will tell if he'll be able to use it again."

“His front leg’s not operable. It’s just not moving. So, we don’t know yet. Time will tell if he’ll be able to use it again,” Stephen Beyer told me. Someone in San Jose’s Parkview neighborhood is shooting family cats. I’ll have details at 11 p.m. #abc7now pic.twitter.com/kLaUorNe4N

He says since his daughter printed and posted alerts around the neighborhood, people have shared stories of their pets being targeted.

Stephen explains why this behavior is alarming, "They do say that it starts with animals and then it- they escalate. This is definitely a mental issue that needs to be taken care of."

Some owners are now limiting their cat's outdoor time. Though they admit doing so isn't easing concern that someone in the neighborhood is shooting family pets.

Putter's owners shared the following link to a GoFundMe page. They tell me money will be used to assist in Putter's recovery effort, and also will be donated to animal welfare organizations: https://t.co/oplb8OYeEN#abc7now

Van Eaton explained, "We have two cats, and it's just a hard time understanding how someone can do something like that."

Putter's owners are counting their blessings, considering the outcome could have been much worse. "It was two inches from his head. It only took one head-shot and he would've been dead," Stephen told ABC7 News.

The Beyer's encourage anyone who might suspect a scab on their pet could be something more, to get an x-ray.