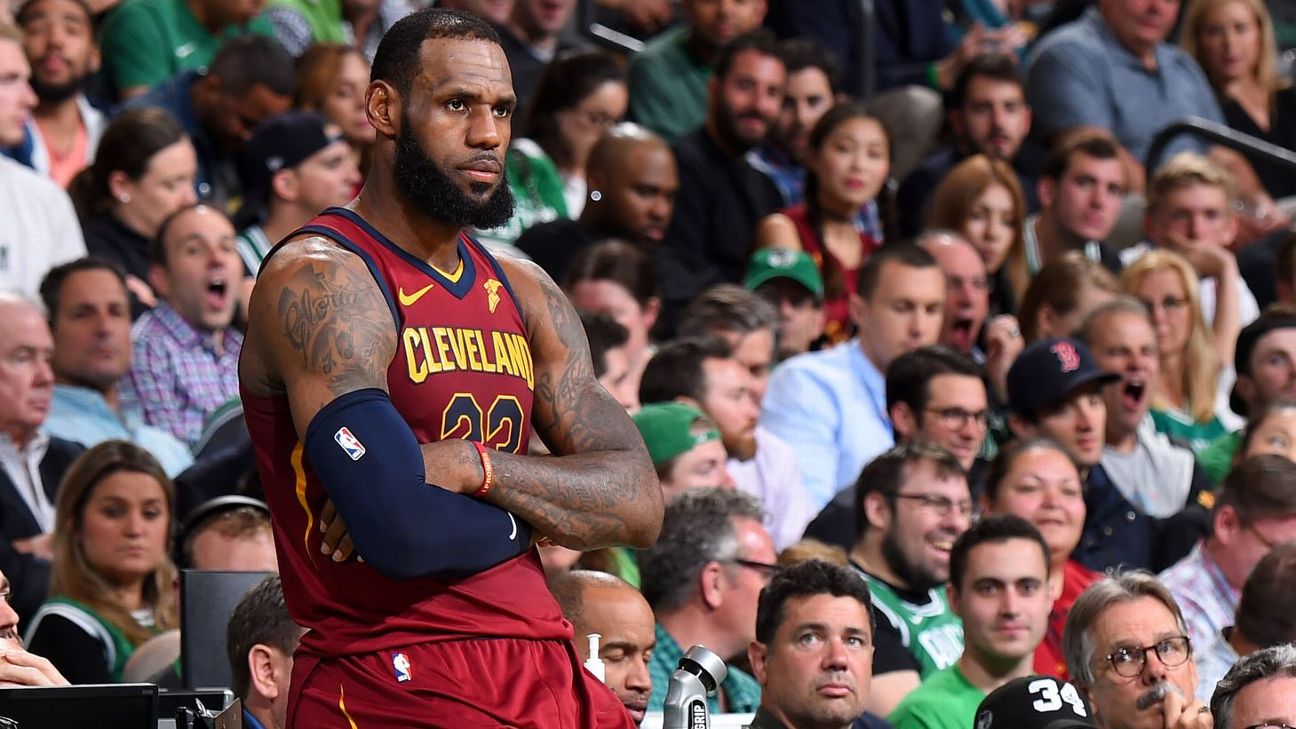 Are we headed for a Warriors-Celtics NBA Finals? What's up with Stephen Curry?

Our NBA experts answer the big questions in the conference finals.

1. Which series has you more intrigued?

Kevin Arnovitz, ESPN.com:Watching the Warriors and Rockets, we're witnessing a fascinating display of the NBA's prominent trends of the past decade. Travel in a time machine 20 years back, and project these games on the side of some building to an audience of basketball lifers, and they'd choke on their Raisinettes. Here are two teams, one playing at a lightning-quick pace with a lineup that would've been incomprehensible. The other team, coached by the guy who fashioned a lot of this stuff, is running a spread pick-and-roll attack that was considered a novelty not so long ago. The two teams have combined to attempt 142 3-pointers over the first two games of the series, and both deploy a switch-heavy defense designed to maximize the versatility of their defenders and account for those shooters.

Marc J. Spears, The Undefeated:The West has me more intrigued. The reason being is that they are the two best teams in the league. The Warriors are the reigning champs. There is the James Harden and Chris Paul dynamic. The scoring and outside shooting. Just a fun, old-school ABA series.

Andrew Han, ESPN.com:Cleveland has the basketball world's attention. In the first round, public thought toyed with LeBron James somehow being eliminated by the Indiana Pacers. Then, in the second round, we all marveled at the utter destruction of the East's top seed (Toronto Raptors coach Dwane Casey didn't even last long enough to see his nomination for Coach of the Year). Now, in the East finals, are we witnessing a Celtics mountain too tall for the King to climb?

Chris Herring, FiveThirtyEight:Rockets-Warriors. While it's jarring to see the Celtics dismantling the Cavs this way -- and to do it with such young players who've had to step into much bigger roles -- there has been a lingering question of just how good the Cavs are for months now, particularly on defense, where they're struggling. There wouldn't be intrigue there if it weren't for LeBron. Meanwhile, the winner of the WCF will be the hands-down title favorite.

Kevin Pelton, ESPN Insider:The West. The Rockets are better positioned to come back at this point than the Cavaliers, who have only two chances to get the road win they'll need to take the series. I'm also curious to see how the Warriors respond to getting blown out in Game 2 in Houston.

2. If the Cavs come back and win this series, how did they do it?

Han:The Cleveland Cavaliers are the 2017-18 Eastern Conference champions. Things looked shaky in the first two games in Boston, but the Cavs' role players come alive at home, knocking down open shots (and some shots not so open). For the Boston Celtics, streaky 3-point shooting befalls the young contenders at the wrong time as the upstarts struggle to manufacture enough offense to give their bulwark defense a chance.

Pelton:Strong 3-point shooting, most likely. As Neil Paine broke down Thursday on FiveThirtyEight, Cleveland's dependence on strong 3-point shooting is notable even in a make-or-miss league. The Cavaliers could useJR Smithto get going after he shot 77 percent from 3 against Toronto, which he has followed up by starting 0-of-7 in this series. Cleveland also probably tightened things up defensively to take away the easy baskets that help a Celtics team that can occasionally struggle to create in half-court settings.

Spears:It has to be much more than the awesome that LeBron James is already giving. Kevin Love has to be a consistent superstar each game. And someone on the Cavs has to show up as a third big scorer. Tristan Thompson has to be a factor defensively, and on the offensive glass, too.

Arnovitz:LeBron replicates his first-quarter performance in Game 2 for the duration of the series. More specifically, the Cavs can start hitting shot attempts at better than a 45.3 effective field goal percentage (eFG). In fact, their eFG on uncontested shots is 45.8! (As a comparison, the Warriors and Rockets are at 78.3 and 75.0, respectively.) Yes, the Celtics' defense is airtight and disciplined, their young wings are lanky and athletic, and Al Horford is one of the best all-purpose defenders in basketball. But the Cavs need to get more out of their pick-and-roll attack -- that means utilizing LeBron as both ball handler and screener, Love as the pick-and-pop threat that he is, Thompson as an athletic dive man and the surrounding shooters (when they're making shots) on the occasions the Cavs can leverage the Celtics' defense.

Herring:Giving Rodney Hood the wrong start time for Games 3-7. Playing much better, more attentive defense without getting lost in rotation. And having at least two players -- outside of LeBron and Love-- shoot the ball well in each game. Boston makes that difficult with how well it stays home and closes out on the perimeter. But if the Cavs don't heat up at least some, I doubt their defense does enough to make this a series again.

Pelton:LeBron's. Barring a trade sending the No. 8 pick in this year's draft for a veteran star, it's unlikely given their age that next season's Cavaliers will be appreciably better than this season's team. And if this season's Cavaliers can't beat a Celtics team without two of its best players, that seems to indicate LeBron will have to go elsewhere to contend for a championship.

Herring:LeBron's. While I guess this run could prompt the Celtics to take a long look at the roster they constructed this past summer and ask whether they really need their Big Three (maybe finding more depth would be of greater use?), the obvious answer here is James. Cleveland wouldn't have a clear way forward after a playoff exit, and no one in its rotation is so young or so good to where we'd expect the Cavs to make a considerable jump anytime soon. It would seem as if it's time to move on if all James cares about is winning.

Arnovitz:The Celtics'. Win or lose, LeBron will survey the landscape of the league and figure out where he can assemble a cast that can compete for a title, whether in Cleveland or elsewhere. But for Boston, this series solidifies a plan several years in the making. The Celtics knew that Kyrie Irving, Gordon Hayward and Horford were playmakers who could provide the Celtics a floor well above where 25 teams reside, even if they got little else from their roster. But with Jayson Tatum, Jaylen Brown and Terry Rozier demonstrating this kind of production, poise and discipline, it's clear that the Celtics will now be a Memorial Day fixture for the coming decade ... and they still have assets in the bank and cards to play.

Han:Undoubtedly the series speaks more to the Celtics' future. Boston was a feel-good story of young players being guided by the veteran Horford. With Irving and Hayward out, any respectable postseason showing would've been deemed a success. Now just two wins away from a Finals appearance, the brain trust in Boston will at least have to entertain the question: Has the Brown-Tatum-Rozier window already eclipsed Kyrie-Hayward?

Spears:The Celtics'. It's amazing to me that two key players are out and they are playing this well. It's a testament to their coach, their talent, their general manager, their teamwork and their toughness.

4. Should the Warriors be concerned about Steph Curry?

Herring:From a health standpoint? Absolutely. Even two years ago -- when he came back from the less-severe knee sprain after missing three weeks and then dropped 40 points in his first game back -- we later found out that a single performance didn't prove that he was all the way back physically. While I wouldn't make too much of his scoring yet (Houston is making him work too much on defense to be the focal point on offense right now anyway), his knee will be something to watch going forward.

Arnovitz:Yes, though "concern" or lack thereof doesn't change the conditions on the ground for Golden State. I'd be less concerned about the defensive piece (when Curry matches up with Harden, Paulor Eric Gordon, the Rockets aren't actually producing all that efficiently) than Curry's movement off the ball. His ability to buzz around screens, suck in defenders and compromise opponents' defensive schemes propels so much of what the Warriors do offensively. Even one lost step, and that offense becomes less effective; it also means less daylight for Curry to catch and shoot.

Pelton:A little. Curry's poor 3-point shooting in this series is consistent with the one area where I found players struggled when they returned from Grade 2 MCL sprains like he suffered. That said, we're talking about 13 shots, which is a tiny sample size. If we weren't already looking for reasons to believe Curry was limited by injury, I suspect this would just be written off as a fluky stretch.

Spears:The Warriors definitely need to be concerned despite the fact Curry strongly states that he is fine physically. And if Curry is fine, then Golden State desperately needs the two-time-MVP-caliber play from him to get over the hump with the Rockets and to repeat as champs.

Han:Let's call this basketball thought experiment Schrodinger's Curry. In one box, Curry seemingly looks OK and is finishing around the rim, unlike the 2015-16 season, when he returned from a knee injury. But simultaneously, the two-time MVP has struggled from beyond the arc in the West finals (just 2-for-13). Rarely does Curry have extended shooting slumps, and unless his physical movement starts to become more apparent, trying to adjust for perceived concerns might only exacerbate the situation.

5. Fact or fiction: We're getting a Warriors-Celtics NBA Finals.

Spears:Fact. I still believe both series might end up with length to them. But I believe the champs and the new kids on the block will figure it out.

Herring:Fact. We honestly haven't seen anything firm from the Cavs yet to suggest that they're the better team in this series. I'd venture to guess that those who feel Cleveland is going to prevail are basing it on an overwhelming faith in LeBron. But Boston's defense is seemingly too stout to place that sort of faith in him this time. It will obviously take more than just a 40-point triple-double from James to get this done, and I don't believe the Cavs have it in them to beat this Celtics team four times in five tries.

Han:Doc Rivers has a playoff adage he imparts to his teams: A series doesn't start until the road team wins. That goes doubly for a series in which LeBron is involved.

Arnovitz:Fact. I'd given up on betting against LeBron James, but there's enough history and enough evidence that the Celtics are the superior squad to suggest they'll represent the East on May 31.

Pelton:That's the most likely outcome after two games apiece, as the updated ESPN forecast indicates. Still, the ESPN panel gives Boston-Golden State a 45 percent chance of coming to pass, so the field still might be the choice over Warriors-Celtics.

LeBron doesn't need Hollywood to generate drama
Rachel Nichols reminds everyone that LeBron James has been down 0-2 before and won a series in dramatic fashion.