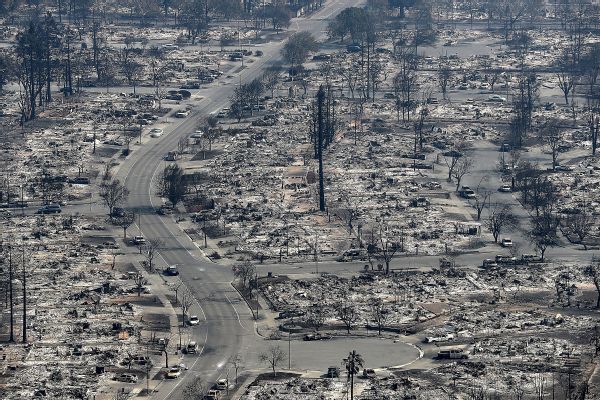 ALAMEDA, Calif. -- The air quality at the Oakland Raiders' facility was so poor from deadly wildfires raging in the North Bay region of the San Francisco Bay Area that the team adjusted its practice schedule Wednesday.

As many as 16 fires have been burning in Sonoma and Napa counties, about 50 miles north of Oakland, since Sunday night, and there have been 21 reported deaths as of Wednesday night, with more than 3,500 homes and businesses destroyed and more than 122,000 acres burned. They are the third-deadliest and most destructive fires in California history.

The Raiders joined with the Bay Area's other professional sports teams -- the 49ers, Giants, A's, Warriors, Sharks and Earthquakes -- to donate $450,000 to support the relief efforts.

The Raiders shortened practice by eliminating individual drills in order to limit player exposure (practice was originally scheduled as a full-padded affair) as ash fell from the sky and the Environmental Protection Agency describing the air as "unhealthy" in Alameda.

"My heart really goes out to the families," Raiders quarterback Derek Carrsaid."When something like that happens, and someone tells you what it really is, you just sit there and think, 'You're fortunate. You're blessed.' So, our thoughts and prayers are with all the families that have lost houses, loved ones.

"That kind of stuff, that's real life, that's hard. Being 2-3 is not hard, when we really think about it ... our prayers are with them, that they can have peace and encouragement."

The Raiders have ties to the areas affected, having previously held training camp in Santa Rosa in the 1970s and early 1980s. They hold it in Napa now.

"House burnt down," Branch wrote in a text message. "Gone. Melted. Everything is lost."

Branch told the Oakland Tribune he grabbed his three Super Bowl rings and some money and evacuated as the flames grew close.

The Raiders (2-3) are scheduled to play host to the Los Angeles Chargers (1-4) on Sunday at the Oakland Coliseum. The team has not announced any contingency plans should the air quality not improve, but the Chargers' home in Carson, the StubHub Center, is already booked for Sunday with an MLS match hosted by the Los Angeles Galaxy.

Levi's Stadium in Santa Clara, about 35 miles south of the Oakland Coliseum, does not have an event scheduled for Sunday, though, with the 49ers playing at Washington that day. The air quality was also considered "bad" in Santa Clara on Wednesday, though.