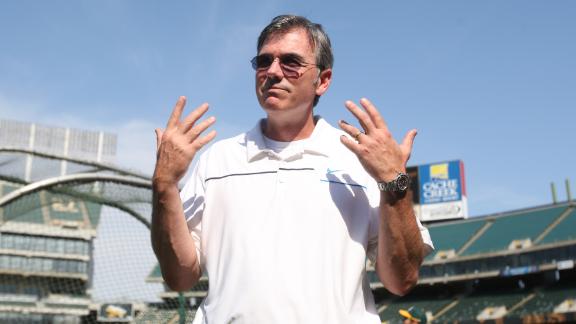 OAKLAND, Calif. -- The strugglingAthleticsreceived yet another big blow to their pitching staff when Scott Kazmir was forced out of his latest start Wednesday with tightness in his left shoulder.

Team officials were awaiting results from an MRI to determine the severity of Kazmir's injury, and manager Bob Melvin couldn't rule out a possible trip to the disabled list for the veteran left-hander.

"We'll have to see where he is tomorrow," Melvin said following Oakland's 3-2 loss to the Detroit Tigers. "He probably felt like he could continue to pitch but it didn't make any sense to. You could tell he was a little uncomfortable after the last pitch when he was coming off the mound. His body language wasn't great so we didn't want to push him."

Kazmir, winless since April 13, didn't allow a hit in three innings and struck out four with three walks. He walked slowly off the mound after striking out Miguel Cabrera to end the third, then later was taken to get an MRI on his left shoulder.

"His body language on the mound wasn't good," Oakland catcher Stephen Vogt said. "It was more grimace-y, just kind of like tight. That's how he described it, that his shoulder was tight."

Should the Athletics be sellers?
The Baseball Tonight crew breaks down whether the Athletics should consider trading some of the key players on their roster.
Related topics:
sportsespnscott kazmirshoulderoakland athleticsmlb
Copyright © 2020 ESPN Internet Ventures. All rights reserved.
More Videos
From CNN Newsource affiliates
TOP STORIES
SJ family's food truck stolen in brazen theft caught on video