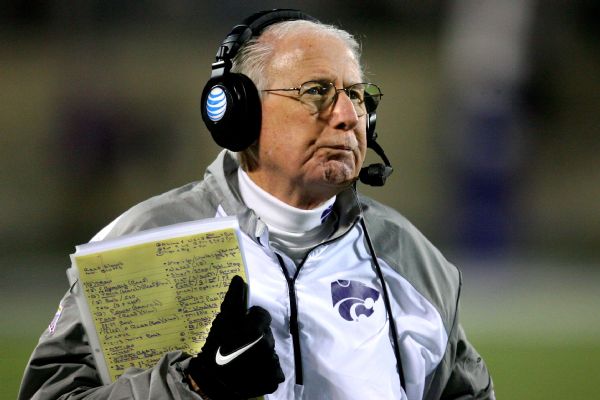 Hall of FameKansas State coach Bill Snyder has been diagnosed with throat cancer but is expected to be on the field for the start of the Wildcats' spring practice next month.

Snyder announced the diagnosis in a lengthy statement Monday, saying that he has been receiving treatment for three weeks and that doctors have "projected a positive outcome."

"I have been diagnosed with throat cancer and have been receiving outpatient treatment at the KU Medical Center for about three weeks and am getting along very well," Snyder said in his statement. "The doctors and staffs at both KU Med and M.D. Anderson [in Houston] have been great; working so very well together to finalize the overall treatment plan which is being conducted in Kansas City. Both 'teams' have projected a positive outcome and have worked out a schedule that allows me to be in Kansas City for my regular treatments and still be back in the office on a regular basis through the first week of March."

Snyder, 77, said his son Sean, the Wildcats' associate head coach/special teams coordinator, and the rest of the coaching staff will continue in "carrying out their responsibilities keeping us on track" when he is away from the team.

Snyder also addressed widespread speculation about his health, apologizing for publicly disclosing his diagnosis before having the opportunity to tell some friends and family members.

"Coach Snyder's health is of the utmost importance, and he has our full support during this time," Kansas State athletic director John Currie said. "We will provide all of the necessary accommodations he and his family need to ensure a smooth treatment process. He will remain our head coach during this treatment period, and we look forward to seeing him on the field this spring and in pursuit of career win No. 203 on Sept. 2."

Snyder, who was inducted into the College Football Hall of Fame two years ago, won his 200th game with the Wildcats in 2016. Kansas State finished 9-4 last season and defeated Texas A&M in the AdvoCare V100 Texas Bowl.

Snyder was hired by Kansas State in 1988 to take over one of the worst programs in major college football, and in a span of a few years had the Wildcats regularly contending for league titles.

He briefly retired in November 2005, announcing at the time that he wanted to spend more time with his family. But the pull of coaching only kept him away for three years, and he returned to the sideline after the program that he had built had begun to fall on hard times.

His second go-round has been nearly as successful as his first. The Wildcats have been to seven consecutive bowl games, and earned a piece of the Big 12 title following a 2012 season that included a No. 1 ranking and Fiesta Bowl appearance.

Snyder signed a $14.75 million, five-year contract extension in January 2013, but it includes an automatic rollover provision that essentially provides him with indefinite job security.

"Coach is one of the most determined individuals I have ever met," Kansas State president Richard Myers said in a statement, "and I know he will successfully complete this treatment program and be on the field with our student-athletes in no time."

Kansas State also announced Monday that longtime assistant coach Del Miller, the first assistant hired by Snyder in 1989, will retire after his current contract expires in May.