Brian Hoyer to start for Browns 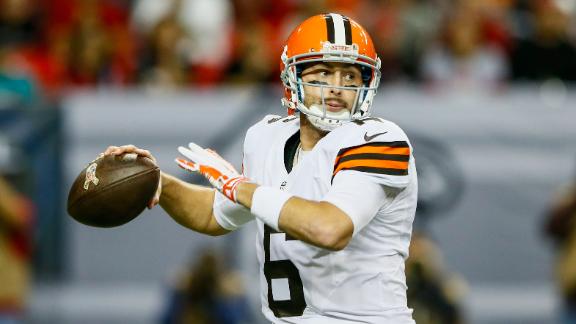 BEREA, Ohio -- The Cleveland Browns' faith in Brian Hoyer continues, and so does Johnny Manziel's spot on the bench.

"After thorough evaluation and talking to the staff, we feel Brian gives us the best opportunity to win on Sunday," Pettine said. "This is a football decision, and those are always going to be based on what we think is best for our team.

"Brian has led our team to a 7-5 record. I'm confident that we can get the entire offense playing at the level needed to accomplish the goals we set at the beginning of the season. Those goals are still very much attainable."

If the Browns lose Sunday, a source told ESPN.com that Manziel could start the final three games of the season.

Hoyer's recent struggles had left the door cracked for Manziel, who completed 5 of 8 passes for 63 yards and had a 10-yard touchdown run in relief during a 26-10 loss to Buffalo on Sunday.

Pettine, the Browns coaching staff and general manager Ray Farmer on Tuesday discussed the pros and cons of starting each quarterback -- Hoyer providing experience and leadership; Manziel providing a spark but with a lack of experience during a playoff push.

That Hoyer was "part of our success" and has "shown the ability to bounce back" gave the edge to the veteran, said Pettine, who wasn't swayed by fans' cries for Manziel. He was more swayed by Manziel's instincts and playmaking, but that wasn't enough.

"I think the Dawg Pound is happiest when we're winning," Pettine said Wednesday. "That's what this business is all about."

Hoyer has thrown one touchdown pass and six interceptions in his last 15 quarters, including an erratic two-turnover performance in Buffalo. Hoyer publicly stated his case for the job in the locker room Monday, saying quarterbacks don't luck into a 7-5 record.

He must find a better rhythm with receiver Josh Gordon. Hoyer has thrown three interceptions the past two games when targeting Gordon.

Manziel stated his case on the field in Buffalo by orchestrating an 80-yard touchdown drive, completing three of his first four passes for 54 yards. Pettine was impressed with that drive but also acknowledged that the Bills were playing a prevent defense and the sequence wasn't a true test of what Manziel might have faced against Indianapolis.

Despite his improvement over the past three months, Pettine knew the "unknown" of a rookie in a playoff push gave him pause as he made the decision Tuesday morning.

"You almost look at it like a risk-reward situation," said Pettine of opting against Manziel. "There's a lot of unknown [with Manziel]."

Don't rule out Manziel playing a few snaps Sunday. Pettine said a Johnny package is "something we keep alive. It would be fair to say it's been more of a discussion" this week.

The Browns likely need at least 10 wins to make the playoffs in a loaded AFC but remain in contention in the AFC North, tied with the Steelers and Ravens at 7-5 and behind 8-3-1 Cincinnati.

Hoyer is considered a leader in the locker room, so no doubt some veteran players will feel comfortable with him behind center, even though Manziel instilled confidence with his play in Buffalo.

Cleveland will be without wide receiver Miles Austin, who was placed on injured reserve Wednesday and is still at Erie County Medical Center recovering from a kidney injury.

The quarterback decision won't matter much if the Browns don't inject life in a running game that averaged 2.5 yards per carry from the tailback spot against Buffalo.

Starting Hoyer The Right Decision For Browns?
Darren Woodson, Mark Schlereth and Jeff Saturday discuss the Browns' decision to start QB Brian Hoyer over rookie Johnny Manziel and debate if that was the right decision.