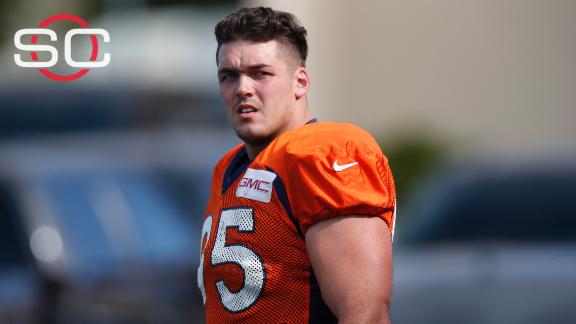 ENGLEWOOD, Colo. -- The Denver Broncos say they are aware of a video that shows defensive end Derek Wolfe throwing a punch in a Denver nightclub Saturday night.

The video, posted by TMZ on its website, shows Wolfe first having a verbal exchange with one or more persons, followed by some pushing and shoving in a group as Wolfe then throws a right-handed punch in a crowd.

TMZ reported that Wolfe was later bloodied in the altercation after being hit with an object -- possibly a bottle -- and left the VIE nightclub.

Sources with the team said police were not called about the incident.

Broncos spokesman Patrick Smyth, in a statement Tuesday morning, said: "Derek talked to us on Monday about the issue and it's been addressed internally.''

Said Wolfe's agent, Mike Simon, to TMZ: "He did not provoke the fight. He was trying to protect a friend. His recollection is that he was hit from the back with an object when he wasn't looking."

The NFL told the Denver Post that Wolfe is unlikely to face discipline from the league.

"We take a look at any such incident," league spokesman Brian McCarthy told the newspaper. "But it doesn't appear on its face to be something that would lead to league discipline."

Whether that means Wolfe will be fined by the team or face some other team-imposed discipline is unclear. The Broncos open their offseason program April 18, but those workouts are voluntary for players, as are the organized team activities in May and June.

The only mandatory days for players before training camp are a June minicamp.

It is the second time since the Broncos won Super Bowl 50 that one of their players has been caught on late-night video that has made its way to TMZ. Former quarterback Brock Osweilerand his wife were videoed trying to walk away from a verbal exchange with several people outside a pizza restaurant last month in Scottsdale, Arizona.

Osweiler, who was shoved from behind in the video just before getting in a car, did not respond to the push.