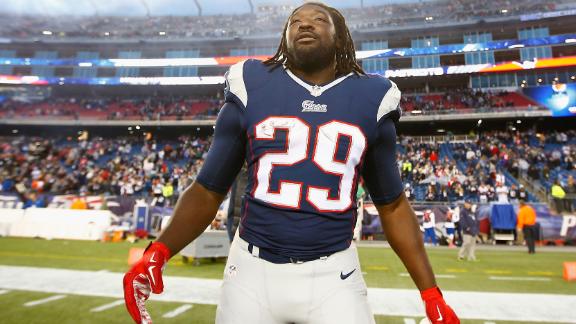 PITTSBURGH -- Antonio Brown was watching Sunday when LeGarrette Blount followed through on a promise to honor the Steelerswide receiver the next time he reached the end zone.

Blount mimicked Brown's patented touchdown dance early in the New England Patriots' 34-9 romp over the Detroit Lions, and more important to Brown is that Blount rushed for 78 yards and a pair of scores less than a week after the Steelers waived him and he resurfaced with the hottest team in the NFL.

"When you're close with a guy, you always want to see him succeed and feed his family," Brown said Monday after the Steelers' first practice of the week. "It's great he's in a good opportunity, and hopefully he learned from everything. I just wish he did [the touchdown dance] for us."

Neither Blount nor Brown anticipated Blount doing the dance in a Patriots uniform when the running back made the promise to Brown a couple of weeks ago. But the Steelers moved quickly to cut ties with Blount after he left the field before the end of a 27-24 win over the Tennessee Titans on Monday night.

"That was to my homie, man," Blount said of Brown. "He's going to always be a lifelong friend of mine. That was a little tribute to him. And like I said, he's always going to be a close friend of mine."

The Steelers waived Blount the next day and promoted rookie Josh Harris from the practice squad. Blount re-signed with the Patriots after clearing waivers, and he made a triumphant return to New England -- Blount played there last season before signing a two-year contract with Pittsburgh -- with former teammates Brown and running back Le'Veon Bell watching on TV.

"I've watched him throughout the whole year, and I know what he's capable of and what type of runner he can be," Bell said. "I'm just glad he got the opportunity and the carries he got."

Bell's career game against the Titans, as well as his emergence as one of the top running backs in the NFL, led to the end of Blount's time with the Steelers. The second-year back rushed for 204 yards and a touchdown on 33 carries, and his play propelled the Steelers to a win after they had trailed by double digits in the second half.

Bell played so well that Blount got on the field for just one snap against the Titans and did not receive a carry. Frustration led Blount to leave the field before the end of the game and hastened his exit from Pittsburgh.

Both Brown and Bell said they are happy that Blount is making the most of the second chance he is getting with the Patriots.

Bell said he talked to Blount on Sunday after the Patriots won their seventh consecutive game and offered congratulations.

"He's not with the Steelers anymore, but that's still one of my closest friends," Bell said, "so I'm going to keep in contact with him."

Brady, Patriots Beat Lions
Tom Brady threw for 349 yards and two touchdowns in the Patriots' 34-9 win over the Lions.