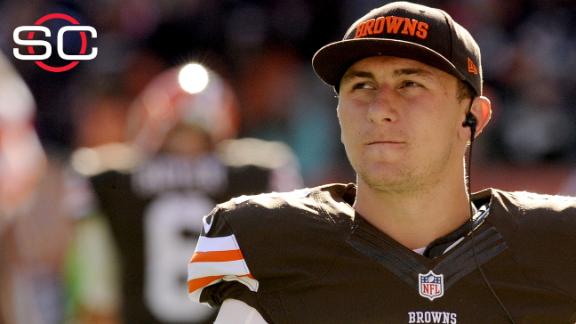 AURORA, Ohio -- Paul Kruger lives in the golf community where Johnny Manziel recently moved, so Kruger knows a little bit about the change in lifestyle for a quarterback who lived in downtown Cleveland as a rookie.

"It's about as polar opposite as you can get," Kruger said Friday at the Browns' charity golf tournament. "Nice, old people everywhere. If you don't tuck in your shirt, they'll come out and, 'Hey, please.'

"So, yeah, it's pretty different."

Manziel, who ended a 10-week stint in rehab in early April, played in the team's golf tournament. He did not address the media formally, but was pleasant and polite before he drove off in a cart to start the scramble tournament.

Manziel recently moved from a downtown Cleveland condo to a golf community in a suburb on Cleveland's far west side. Kruger said he's not neighbors with Manziel, but does live close by. Kruger described the mood in the neighborhood as similar to the mood at Barrington Golf Club as he awaited the tournament's start.

"Nice and quiet," the Browns linebacker said. "Birds chirping. It's an awesome place."

Golf is a big part of Manziel's treatment after rehab.

He doesn't even believe that Manziel's lifestyle will affect the community vibe.

"You can't make too much noise out there anyway, so I don't know if their world's going to be that much different," Kruger said.

Humor aside, the Browns feel that Manziel's move was a good one, and reflected a post-rehab attitude that has earned praise from teammates.

"I feel good that he is a young man that's doing the best he can with the circumstances he has," general manager Ray Farmer said. "He wants to give himself the best opportunity. Whatever he thinks those adjustments need to be, those are things that he's going to do."

On the field, Browns cornerJoe Hadensaid Manziel's attitude is to try to win the starting job, and added that Manziel told him he had "taken things for granted" and now better realizes he is "living his dream."

Farmer said the decision about the starting quarterback belongs to coach Mike Pettine, but the GM believes the best player should play.

"My conversations with [Manziel] have been pretty deliberate, like you've got to come and compete," Farmer said. "This is still the National Football League. There's no rest for the weary.

"We get it. We're supportive of him and his personal endeavors and he's got to come out and perform and demonstrate that he's worthy of being on the 53-man roster."