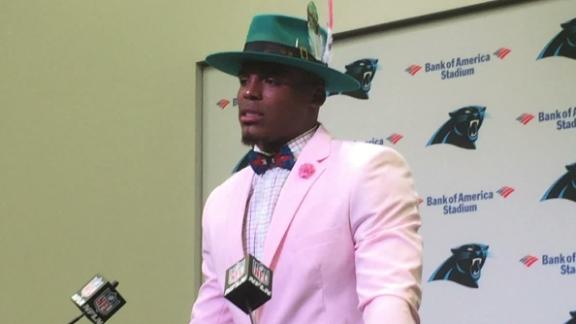 "It's really taking the fun out of the game for me -- honestly, it really is," Newton said. "At times, I don't even feel safe. Enough is enough. I plan on talking to commissioner Goodell about this. It's not fun, and I don't know what I have to do."

Newton said the breaking point came in the second half of the Panthers' 30-20 victory over Arizona on Sunday when he took a hard shot to the knees.The play happened on third-and-goal from Arizona's 2-yard line. Defensive tackle Calais Campbell came in low as Newton released an incomplete pass to Philly Brown.

"I could have torn an ACL," Newton said. "That was the breaking point for me."

Newton was on the ground for longer than usual as Carolina and Arizona players checked on him. When he got up, he took his case to the official and got in the face of at least one Arizona player.

Newton used the words "bullcrap" and "horsecrap" in reference to his conviction that officials aren't making calls when he's hit in the pocket. Newton said other quarterbacks in the league get those calls more often.

"I showed a lot of frustration today, and I apologize to the referee I was talking to. But I don't think there's a person that can go through what I go through and keep their head, you know what I'm saying? Hits to the head, that's one thing, but when you're not protected in the pocket, that's another thing. It became the story of my life ever since I came in. It's always, 'Oh, we missed that, I'm sorry.' That's bullcrap -- that's bullcrap."

Newton was unhappy in general after taking several hits that didn't draw flags.

Newton already has missed one game with a concussion after a legal helmet-to-helmet hit at Atlanta. He was hit at least four times in the helmet during the opener at Denver, with only one penalty called.

"At times in games, I haven't felt protected by the officials," Newton said. "For me, I'm just trying to bite my tongue, trying to get through the game, because it's frustrating. It's frustrating ... I know people are probably taking what I'm saying out of context, because you have to look back and look at it from my vantage point. I play this game one way; I'm no different than anybody else. I'm just trying to win football games, and whatever I'm asked to do, that's what I'm going to do."

A roughing the passer penalty hasn't been called on the defense facing Newton since the opener at Denver.

Newton plans to address no-calls with Goodell
Cam Newton says he plans to talk to NFL commissioner Roger Goodell about the no-calls he has been receiving on what he believes should be hits to the head, adding that it is taking fun out of the game.
Related topics:
sportsespncarolina panthersnflcam newton
Copyright © 2020 ESPN Internet Ventures. All rights reserved.
More Videos
From CNN Newsource affiliates
TOP STORIES
Suspect surrenders after lockdown at Santa Clara County Jail