Cam Newton: It's time to retire the Dab, do something else 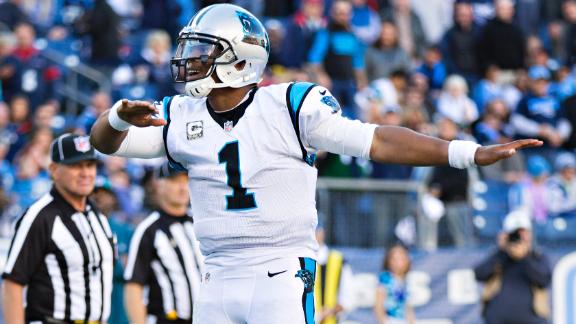 CHARLOTTE, N.C. -- The Dab has been shelved.

Carolina Panthers quarterback Cam Newton is working on another touchdown celebration to replace the Atlanta-based dance he helped to popularize last season.

"I have to put that aside,'' the NFL MVP said Thursday during an interview on WFZN-AM radio's "The Mac Attack" show from Charlotte.

Newton first performed the Dab during an Oct. 18 game against the Seahawks. It drew national attention, however, after he did it during a Nov. 15 game against the Titans. Tennessee players took issue on the field -- linebacker Avery Williamson confronted Newton -- and a mother who attended the game with her 9-year-old daughter wrote an open letter to the quarterback.

She wrote: "The chest puffs. The pelvic thrusts. The arrogant struts and the 'in your face' taunting of both the Titans' players and fans. We saw it all."

"I think I'm safe in saying thousands of kids watch you every week," she continued. "You have amazing talent and an incredible platform to be a role model for them. Unfortunately, what you modeled for them today was egotism, arrogance and poor sportsmanship."

Newton defended his right to dance, saying it takes him to his "happy place." He continued to Dab the rest of the season.

"Everybody is entitled to their own opinion," Newton said of the mother's comments. "You can't fault her for that. It is what it is. If she feels offended, I'll apologize to her, but at the end of the day, I am who I am."

So what will Newton's new touchdown celebration be? He didn't say.

"I have until September to find out," he said Thursday.