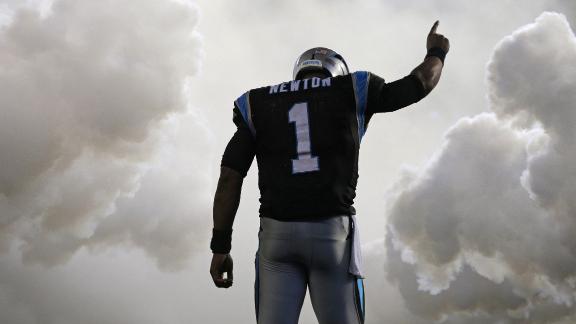 Neither Newton nor Rivera attended the awards show, as they were at the team hotel in San Jose, California, preparing to face the Denver Broncoson Sunday in Super Bowl 50 at Levi's Stadium.

"It means so much, but not just for myself,'' Newton said in a video acceptance speech for the MVP award. "To be the first person in Panthers history to win it -- that's what I'm most proud about. I've received a lot of awards, but to be able to get this organization here, I'm really proud. We didn't get in this position by happenstance. It took years of hard work and dedication, and now we are reaping the benefits."

Newton was a landslide choice for MVP, with 48 votes from a nationwide panel of 50 sportswriters and broadcasters who regularly cover the NFL. Fellow QBs Tom Brady and Carson Palmer each received one vote.

In his fifth pro season, Newton also earned the Offensive Player of the Year award, which his father, mother and two brothers accepted Saturday night.

"Cam took an unconventional journey to get here, and we're just so proud of what has happened, my family and I," Newton's father, Cecil, said. "So many thanks go out to so many people, from Pop Warner to the Panthers. I don't have time to tell you all 'thank you.' You know who you are. We know who you are."

If Newton and the Panthers win Sunday, it would make Newton the first quarterback and second player ever to win a Heisman Trophy, college football national championship, NFL MVP and Super Bowl.

Running back Marcus Allen ledUSCto the national title in 1978, won the Heisman in 1981, led the Los Angeles Raiders to the Super Bowl in 1983 and was named league MVP in 1985.

Newton won the Heisman and led Auburn to the national title in 2010.

Manning, a five-time NFL MVP, said Newton is the future of the league.

"Anything that the sheriff has to say, you can probably ink it in gold,'' Newton said during Super Bowl media night. "It's just a tremendous honor to be even mentioned and affiliated with the face of the league.

"But yet, I think I have bigger fish to fry on Sunday, and then we'll worry about the rest of the eight to 10 years after that."

Newton guided the Panthers to an NFL-best 15-1 record with a career-best 35 touchdown passes, as well as 10 rushing touchdowns during the regular season.

He had a career-best 99.4 passer rating and threw five touchdowns in a game three times in a five-game stretch. In his past 10 games, including the playoffs, he has thrown 26 touchdowns with only three interceptions, for a rating of 119.1.

At 6-foot-5 and 260 pounds, Newton has redefined the quarterback position as a runner and a passer out of Carolina's read-option offense.

"God's not making another Cam Newton for a long time,'' Hall of Fame wide receiver Cris Carter said. "He broke the mold when He made him.''

"He's got a rocket of an arm, which he has learned to harness,'' Polian said. "He can do things in the run game that no other quarterback, perhaps in the history of the game, can do.''

Newton has gotten a lot of publicity for his touchdown dances this season. The "dab" became a phenomenon across the country after Newton celebrated a touchdown Nov. 15 against Tennessee with the dance that originated in Atlanta.

Rivera said that shouldn't detract from what the quarterback has done on the field. He called this season Newton's "moment.''

"This is a young athlete that has such a skill set and such a football mind that he can take it to the next level, do things differently,'' Rivera said. "He can be the Super Bowl champion, the MVP and all that, and at the same time be able to show people how to do things.''

"That's what the great ones have. ... That's what I've enjoyed watching Cam in his ascension to an MVP-type year.''

Rivera was presented with his second coach of the year award, and he accepted in a video.The only other Panthers coach to win the award was Dom Capers in 1996.

"It's a tremendous award for the organization. It validates everything that we've done," Rivera said. "And again, our success always starts at the top. I really do appreciate our owner, Mr. [Jerry] Richardson, for believing in me and giving me my opportunity. Dave Gettleman and Marty Hurney -- the two general managers I've worked with -- I thank them for what they've done. Our coaching staff has been tremendous. Our players have been outstanding."

Rivera dedicated this award to his late brother, Mickey, who died recently.

Rivera, 54, was the first player of Puerto Rican and Mexican descent to play in the NFL when he was drafted by the Chicago Bears in 1984. A linebacker out of theUniversity of California, Rivera helped the Bears win Super Bowl XX the following season.

Rivera interviewed for a head-coaching position eight times before finally being hired by the Panthers in 2011. There was speculation that his job was in jeopardy early in the 2013 season, after a 1-3 start following 6-10 and 7-9 campaigns.

The Panthers finished that 2013 season 12-4, and Rivera was named coach of the year. He has led Carolina to three consecutive NFC South titles. No NFC South team had won two in a row before the past season.

"It's rewarding for him, but I know he's focused on trying to win on Sunday,'' Goodell said.

Goodell said Rivera is a great example of what the NFL wants to represent in terms of diversity.

"The success of Coach Rivera, hopefully that inspired some young people who want to get into coaching that have Latino backgrounds.''