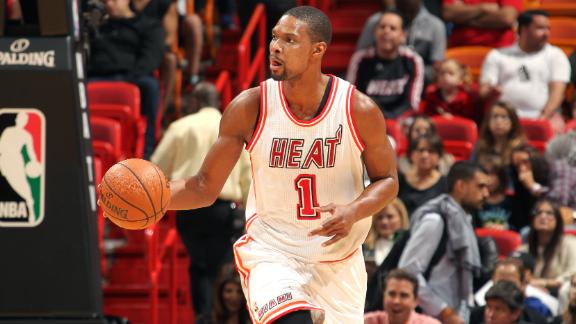 TORONTO --Chris Bosh's All-Star participation for this year is over before he ever took the floor in the city where his career began.

The Miami Heat forward has withdrawn from Saturday's 3-point contest and Sunday's All-Star Game, citing a strained right calf. Bosh, who will remain in Toronto for the weekend, was replaced on the Eastern Conference roster for Sunday's game by Atlanta's Al Horford, chosen by NBA commissioner Adam Silver to fill the vacated spot.

Portland's C.J. McCollum will fill Bosh's spot in the 3-point event, keeping that field at eight as planned.

"I am honored to be selected to participate in All-Star Weekend festivities and will still be here to support my fellow East All-Stars,'' Bosh said in a statement released through the Heat. "But I will also use this weekend to try to heal and focus on the second half of the Heat season.''

The circumstances of how and when Bosh strained his calf were not made clear. He worked out Wednesday night in Miami in preparation for the 3-point contest, flew to Toronto on Thursday and was in the audience at the NBA All-Star Technology Summit on Friday morning before joining the other East All-Star selections for interview sessions with reporters.

Bosh did not mention the injury in that media day availability, nor in an subsequent brief interview with The Associated Press.

"I'm just happy to be here for myself and my family, to accomplish some things and some goals that I said I was going to do,'' Bosh told the AP when asked what reaction he expected from fans in Toronto, where he played his first seven pro seasons. "It's really cool to actually do them. It does have significance being here and being able to just really take in the experience and be an All-Star again in the city where I pretty much grew up.''

About four hours later, the NBA and the Heat announced Bosh wouldn't play.

The timing of the injury, and that it's a calf problem, have eerie similarities to the scare Bosh went through last season. Shortly after the 2015 All-Star Game in New York, Bosh was diagnosed with a blood clot on his lung -- which, he believes, formed when he was kicked in the calf during a game weeks earlier. The calf was a problem for several games, but the blood clot was the far more daunting challenge and forced him out of the second half of the season.

Horford had been named an All-Star three times previously. He's averaging 15.3 points and 6.9 rebounds this season for the Hawks, who might be looking to trade him by Thursday's deadline.