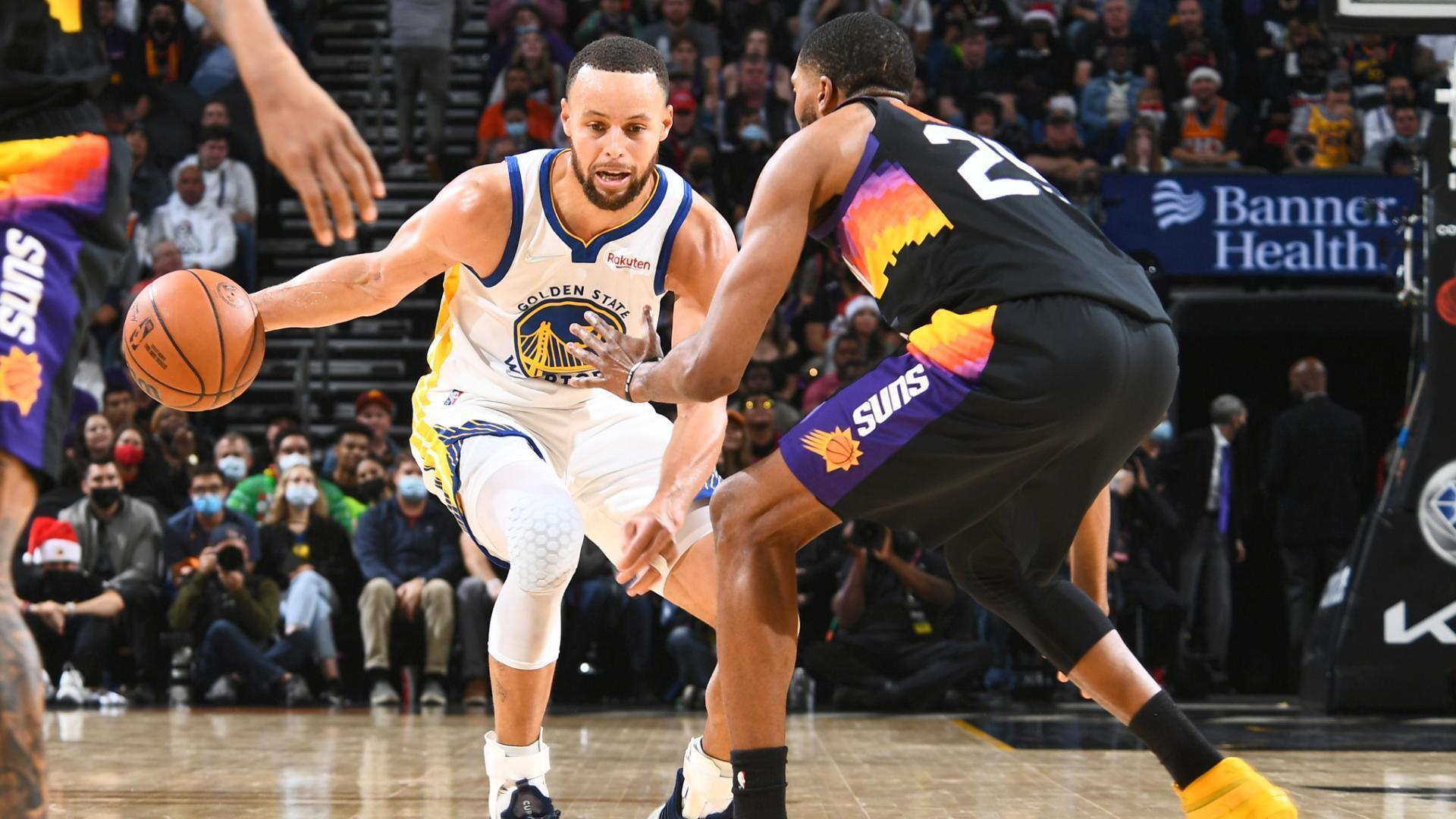 PHOENIX -- - The Golden State Warriors kept it close despite being short-handed, setting the stage for a player to take over down the stretch.

One did - and it wasn't Stephen Curry. Otto Porter Jr. took late-game honors.


Curry had 33 points, Porter scored seven of his 19 during a key late stretch and the Warriors regained to top spot in the NBA from Phoenix, beating the Suns 116-107 on Saturday.

"I drew up every play, I completely organized every aspect of it," Warriors coach Steve Kerr said sarcastically. "Otto was great. He's just added so much to our team with his shooting from that position and his rebounding and defense."

Curry carried most of the load, overcoming a mediocre shooting night to crack 20 points for the first time in nine Christmas games. He finished 10 for 27, including 5 for 16 from 3 to help the Warriors end Phoenix's 15-game home winning streak.

"Coach drew up a couple plays that freed me open," Porter said. "Did a good job of finding me, was able to find a rhythm."

The Suns had their chances, keeping it close until the closing minutes in a raucous home atmosphere. They couldn't close it out, failing to score over the final 3:01 to lose for the third time in 28 games.

Chris Paul had 21 points and eight assists to take up some of the slack from leading scorer Devin Booker, who was held to 13 points on 5-of-19 shooting. Deandre Ayton added 18 points and Mikal Bridges 17.

"They created those breaks. They played harder than us," Suns coach Monty Williams said. "It's rare when I say that about our team. They outworked us more consistently for 50-50 balls, timely offensive rebounds, diving out of bounds to save balls."


The two teams with the NBA's best records played in just the third Christmas game in which both teams had a winning percentage of at least .800.

Playing on Christmas is nothing new to the Warriors. This was their ninth straight Christmas Day game and 11th in 12 seasons. The Suns, once regulars on the Christmas schedule, were in their first since 2009.

Curry had 11 points in the first quarter and Payton a massive rebound slam as the Warriors built an early 10-point lead. The Suns revved it up in the second quarter, going on a 15-3 run and taking a 62-58 halftime lead on Paul's last-second 3-pointer.

The teams continued to trade 3s and baskets in transition, neither able to gain any separation until Golden State went on a short run to go up 107-99.

The Suns pulled within two, but Porter hit consecutive jumpers and a long 3 to stretch Golden State's lead to nine.

"They wanted it more and they played like it," Booker said. "We just have to take this loss and move on to our next game."

The four players weren't the only ones Golden State had in health and safety protocols. The Warriors also had four coaches out, forcing Kerr and his staff to shuffle responsibilities.


"Missing all those guys was really bizarre," Kerr said. "The group did a really good job. These are strange times for a lot of reasons, but I've never seen four coaches out at the same time."

Warriors: Reserve G Moses Moody also was out in health and safety protocols. ... Draymond Green was called for a technical foul in the second quarter while arguing for a push-off by Booker. ... Curry has made a 3-pointer in 156 straight games, one off the NBA record he set from 2014-16. He's also made least two 3-pointers in 15 straight games, the longest active streak in the NBA with Phoenix's Cam Johnson.

Suns: F/C Frank Kaminsky (knee), F Abdel Nader (knee) and F Dario Saric (knee) were all out. ... Paul was called for a technical foul in the third quarter after aggressively giving the ball to one of the officials after a non-call on a drive to the basket. ... Johnson went 2 for 5 from 3 to continue his streak of making at least two to 15 games.